Last weekend I posted a review of one of Polaroid’s 7″ tablets, the PMID701C, and today I have my hands on the next model, the PMID701I. 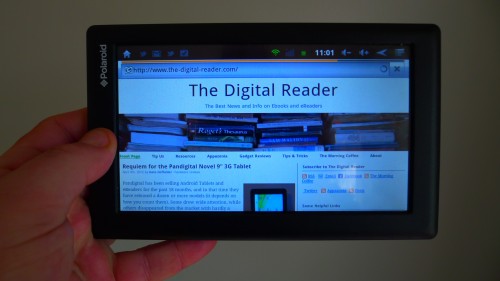 I happened across this tablet at BigLots this morning where it was selling for $99, the same price as the earlier model. I wasn’t expecting to see it there, and I had been planning to get a different tablet. But due to an overwhelming itch of curiosity, I got it.

I have both tablets on my desk at the moment and I cannot tell the difference without turning them on. Aside from the small detail of the firmware (earlier model runs Android 2.3 while the later model runs Android  4.0), they are literally identical. That being the case, I’m not sure at the moment that I will follow through with a review of the later model; I believe it will work just as well as its predecessor.

But there is at least one other important point which I can answer. Last weekend I posted instructions on how to add Android Market to the PMID701C, the previous model (same hardware but running Android 2.3 Gingerbread).  Today I can confirm that those instructions work with the later model as well. I have installed Kindle, Aldiko, and Angry Birds from the Android Market. They work.

This is an important detail because I was pretty sure it wouldn’t work. I thought the different firmwares would be a stumbling block but I was wrong.

Update: But after using it for half an hour I think I do see a difference in performance. Angry Birds is considerably more laggy on the later tablet, which runs Android 4.0. That might be a good reason to get the earlier model.

Even so, this is very good news because I now have a tablet running the latest generation of Android plus Android Market. For a $99 tablet this is a very nice deal.