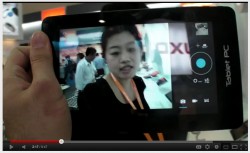 Late last week I posted a couple super cheap tablets (here, here) that Charbax found on trip to Shenzhen, China, and one wit complained that the screen resolution was too low. Those tablets did have the basic 800×480 screen resolution, so he had a point.

Here is my response.

Charbax did a booth tour of Daza Electronics, and mixed in among the tablets running on Rockchip CPUs were the couple tablets based on a Boxchip A10 CPU.  The rest of the tablets are cool but I only haves eyes for this one.

If I ever get the chance, that will be my next tablet. I know that I have trumpeted the A10 chipset before, but it offers the best value for the price. I have budget tablets on my desk with both a Rockchip 2918 and the Boxchip A10 CPU. In fact, the Polaroid tablet I bought yesterday and the Skytex tablet that I hacked last night could probably stand in for their respective CPUs.

Both run Android 4.0, and the Skytex tablet performs better. Of course, it also currently costs more on the retail market so perhaps I didn’t make my point as well as I would have like. But if you compare all the tablets shown in this video I think we’ll see a trend. The Boxchip CPU adds a little bit to the price but a lot to the performance.

In any case, all the interesting budget tablets (for the US market) I saw at CES 2012 had the Boxchip A10, not one from Rockchip. The manufacturers certainly think it’s the best value.