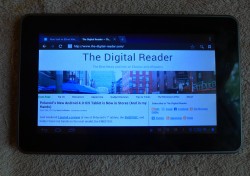 Earlier today I learned that Skytex had released a new firmware update for their second Android tablet, the SkyPad Alpha 2.

This tablet shipped last fall running Android 2.3 Gingerbread on a Boxchip A10 CPU. It was I think the first tablet to use that chip and it had surprising performance for the price.

This tablet is built around a 7″ (800×480) screen with a 1.2GHz CPU, 400MHz Mali GPU, Wifi, camera, speaker/mike, HDMI out, 8GB flash storage, and a microSD card slot. It has a sleek curved metal back with a distinctive plastic oval towards one end (over the Wifi antenna).

Skytex had always planned to release an update with the latest version of Android. They released a beta version of the firmware round the time of CES 2012, but it was buggy. This new firmware fixes the bugs and offers a much improved user experience. The installation process is a pain in the arse, but it’s worth it. I think the later firmware is more usable.

I had installed the beta firmware quite some time back, and that was my first experience with the latest version of Android. To be honest, I could take it or leave it. While I’m sure it does some impressive things behind the scenes, I wasn’t wowed by the  visible differences from Android 2.3 Gingerbread. 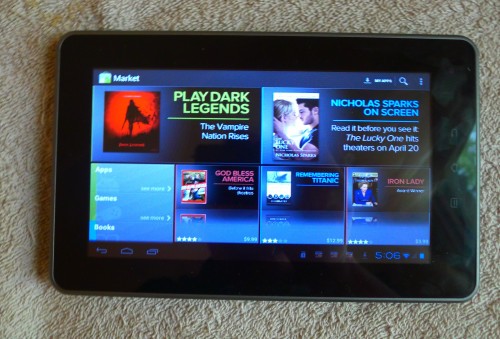 And after you’ve installed the firmware, you might want to consider installing Android Market. It will just take a second and it will give you access to the best source of Android apps. That adds a lot of value, IMO.