Yanko Design is back today with another concept design for a hybrid device.

The Floater is a multi-part foldable device that tries to fill the needs of a smartphone with a 4.6″ screen and an ereader with a 6″ screen. You can see it above in its folded form; the object in the upper part of the image is supposed to be a transparent LCD which would be stored in between the other 2 halves.

Here’s what it would look like if it were unfolded: 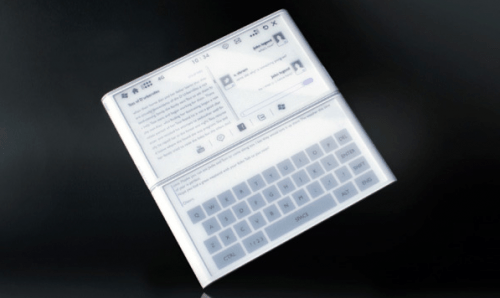 Yeah, I’m not to sure how well that would work, but then again there’s a lot about this design that is unexplained. For example, where does the transparent core go when the Floater is unfolded? Wouldn’t it fall out? If not, then would the core stick to one half  of the Floater thus making it unbalanced?

In any case, I’ve seen better concepts for a hybrid device of this kind. The Flexphone comes to mind, for one. That is a tri-fold design concept with a single screen that can grow from a smartphone to a small tablet (7″, about).

But I’m not sure even that design will be built. The thing is, smartphones are approaching tablet dimensions without anyone asking for the ability to fold them. Consider the Samsung Galaxy Note. That thing has ginormous 5.3″ screen. I own computers that are smaller and have less processing power.

As much fun as these devices might be to imagine, I doubt we’ll ever really see them.