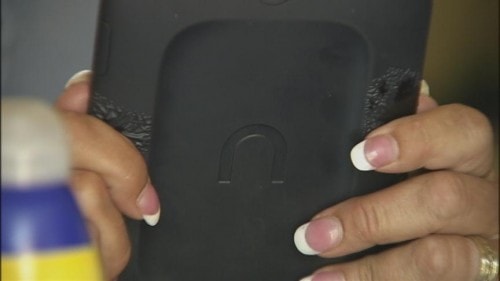 Summer is rapidly approaching (in the northern hemisphere, at least) so today I thought it would be useful to post this story as a public service announcement.

I’m sure lots of people will be taking their ereader on trips this summer and that includes the beach. But you might want to rethink that; it seems that plastic shells used on ereader  and other gadgets don’t exactly get along with some types of sunscreen. One Atlanta native had to learn that the hard way.

She reports that she had applied spray-on sunscreen while on the beach. While she didn’t get any spray on the Nook itself, she did hold it when she was reading. As you can see from the photo above,the sunscreen on her fingers ate away at the shell.

One the one hand, this is an old story. Plastic often reacts poorly to chemicals, as anyone who was a teenage boy could tell you in some detail. And having gadgets destroyed by the chemicals on your hand is again not new.

On the other hand, this is the first time I’ve ever seen this kind of story about an ereader. The Kindle has been out for some 4 years now so I’m slightly surprised that this kind of damage hasn’t made its way around the tech blogs.

In any case, be careful.