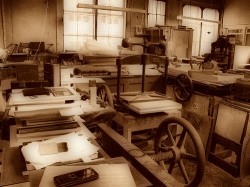 Amazon ‘s own print-on-demand service CreateSpace has just announced a new distribution venue. This sub has been printing and distributing books in the US ever since Amazon bought it in 2005, and as of today it can now supply ebooks to all of Amazon’s European websites, including Amazon.co.uk, Amazon.de, Amazon.fr, Amazon.es, and Amazon.it.

Authors and small publishers now have more options for where they can sell their books. With minimal effort they’ll be able to use their existing CreateSpace account to expand their readership to include dozens of new fans.

Of course, this expansion only adds Amazon ‘s websites to the mix; it doesn’t include the dozens of other retailers in Europe nor does it include brick and mortar stores, which are still doing a brisk trade in some countries. And it still doesn’t offer as many potential markets as KDP, Amazon ‘s ebook distribution platform, but this is still a step up.

CreateSpace is moving into a space with several smaller competitors and at least one major competitor: Lightning Source. In fact, Amazon just created a rather interesting situation where they are once more competing with one of their suppliers. Lightning Source has an established distribution system that includes a lot of booksellers in Europe, including Amazon.

I wonder if we might see a repeat of Amazon’s blackmail efforts of 2008. You might recall way back in 2008 when starting pressuring small publishers into switching from Lightning Source to BookSurge (later renamed as CreateSpace).  If a publisher didn’t give in, Amazon threatened to remove the buy button from that publisher’s listings on Amazon.com. And Amazon followed through, too.

Probably not. Amazon might be evil but I doubt they’re dumb enough to make the same mistake twice.