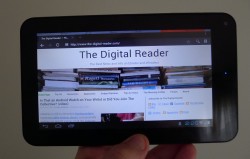 The InnoSoul is the latest Android tablet to go for the budget label at the $99 price point and like the last several I have tried it is a decent device. I got this tablet a little over a month ago, so this review is rather late. But the delay is also a comment on the quality of the tablet; I have been it for the past month as my main reading device and general distraction.

So what did I think? Well, it’s an okay tablet, but I’m sitting here having trouble differentiating it from the other $99 tablets I’ve seen. It has more ports than others in this price range (HDMI, USB Host) as well as a speaker/mike combo (skype should be possible) and it even has a VGA webcam. 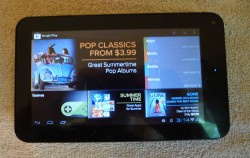 It comes with a decent set of apps, including Android Market, media players, web browser and pretty much all the basics. They run adequately well, considering the  CPU. Angry Birds was reasonably fast to load and play.

But I have noticed a number of issues with it. For example, while it ships with Android Market and you can install most of the listed apps, but some don’t work. For example, Google Reader installed but it wouldn’t run. It crashes right after loading. I’ve also noticed that the browser believes that it’s not running on an Android tablet.  The user agent says that it’s running Mozilla, and that could be a problem if you prefer to view mobile sites on the small screen. 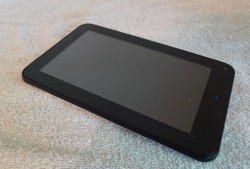 The full specs are below, so I’ll just comment on the general feel here. This tablet is light but it feels reasonably solid. The components are about what I’d expect for the price, and I have not seen any serious issues aside from the webcam, which outputs a marginal quality picture. It’s a pity that the camera is poor; the included camera app offers quite a few options for exposure, light adjustment, and so on.

I was only able to use this tablet at my desk, so I wasn’t able to get the most accurate measure of battery life. But I did notice that I routinely got 3 or so days of battery life from this tablet; that’s not bad.

For some reason I’m not getting a feeling for this tablet other than that it’s very adequate. That’s not really a bad thing and this tablet does live up to my expectations,  but for some reason I’m just not as thrilled with it as I could be. But never mind me. It’s still an acceptable tablet in the $99 price range.