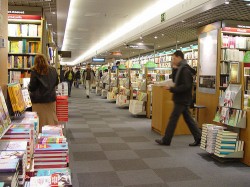 The 71st annual Madrid Book Fair kicked off on Friday and there’s one company on everyone’s mind: Amazon. With book sales down across the country many are blaming the retail giant. There’s even talk, including some coming from the president of CEGAL, the Spanish Booksellers’ Association,of suing Amazon for not respecting Spain’s pricing laws.

La Informacion reported last week that the Spanish book market has seen a frightening decline over the past 3 months. Many booksellers are reporting a steep drop off in sales, with some industry sources estimating that the market is down by as much as 30%.

While the economy is down everywhere, some aren’t blaming the recession. Aaccording to Fernando Valverde, president of CEGAL, it’s all Amazon’s fault. “Amazon is the executioner of the booksellers, and all the Spanish publishing sector,” he said. “They don’t respect the fixed price of books and therefore we filed a lawsuit against them,’ he added.

Unfortunately for Valverde, Publishing Perspective reports there’s no clear  evidence of Amazon breaking Spanish law. Publishers haven’t reported seeing any chicanery, and when they did a cursory search of Amazon Spanish website it didn’t reveal any obvious sign of skullduggery on the part of Amazon.

Update: Readers are disputing the report that Amazon didn’t break the law by discounting their books. This looks like it could get interesting.

What’s more, this isn’t a mistake that Amazon is likely to have made. Amazon is the type to find ways to bend price fixing laws, not break them. I recall a time a few years back when Amazon was penalized for breaking similar laws in Germany. Only they didn’t, quite. Amazon was caught not underselling the competition but offering free shipping.  Regulators decided that while it didn’t technically break the law, it qualified as offering too much of a discount on the price of a book.

CEGAL is also said to be considering launching their own  e-commerce platform.  There’s hope, given the decline in sales of paper books at brick and mortar bookstores, that it would allow independent booksellers to compete with Amazon. They haven’t released any information yet but it sounds like the new platform will focus on paper books as much as digital.