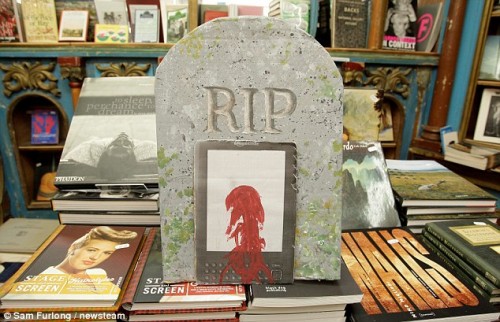 The Hay Book Festival is kicking off today in this small border town.  A quarter of a million people are expected to attend this year, and if some local booksellers could get their way no Kindle owners would be welcome.

The Daily Mail is reporting that there’s a growing movement among Hay area booksellers to ban the Kindle and other ereaders from the Hay Festival. A coalition of local booksellers are blaming the Kindle for the closure of 5 local bookstores in the past year.

The bookstore owners say that Kindle owners are different from other readers in that they walk around like robots, not noticing their surroundings or interacting with other festival participants. (Clearly these booksellers are forgetting about readers like me; I was obliviously walking into street signs, branches, cars, and people long before I bought my first ereader.)

While some might pretend there’s a controversy here, this isn’t really that much of a story. The booksellers in question have little to do with running the Hay Festival so their protests, as colorful as they might be, will have little effect. What’s more, I suspect they know that they cannot actually accomplish their goal. What they’re really doing here is generating a spectacle just to draw attention to their bookstores.

That’s fine by me, but what they’ve also done is made themselves look foolish. You see, the iBookstore is listed as a sponsor of the book fair. This raises the obvious question of whether the Kindle itself is so evil that it must banned then why is it okay to read ebooks on your iPhone?

But what’s even more amusing is that Google is also a sponsor, and guess what they sell in the UK? eBooks, and they’ve been selling ebooks there since last year.

I do find it amusing, yes. These booksellers are harping on the evils of the Kindle while ignoring its competition.  If the booksellers really wanted to accomplish something, they might want to focus on the other more serious threats to their existence, including online booksellers as well as the many other activities that people could be doing instead of reading.

When you look at it in proper perspective, these booksellers don’t look principled so much as as they look clueless and out of touch. One might as well try to order back the tide.