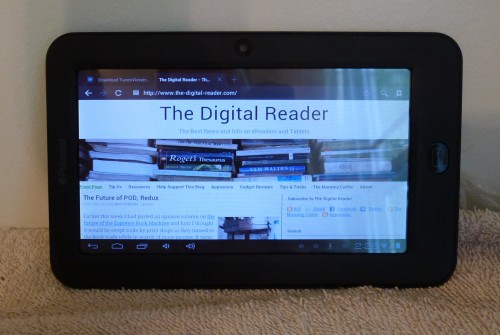 Polaroid seems to be trying to start a tablet of the month club. The reason I say that is they keep releasing new tablets, all of them cheap and all of them launched with little fanfare. 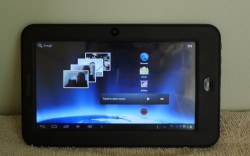 The PMID702C, which I found last weekend at BigLots for $90, is no exception to the quip. It’s another sub-$100 7″ Android tablet, and like its predecessor the PMID701i it’s running the latest version of Android on a 1GHz CPU.

But unlike its predecessors, this tablet also comes with a VGA webcam in addition to the graphics chip, g-sensor, 4GB Flash storage, microSD card slot, Wifi, capacitive touchscreen, and a single speaker.

The PMID702c has a much less blocky design than Polaroid’s earlier models. It’s thinner and has a slightly curved back. It’s also lacking the home, menu, and back buttons (which this version of Android no longer requires). All the buttons and ports are along the one short edge (headphone jack, microSD card slot, USB, volume buttons, power buttons). The one button you see on the face acts as the home button, and the camera is centered above the screen.

Appearances aside, this pretty much is the same tablet as Polaroid’s previous models.  The only real difference I can see between this tablet and the PMID701i is the VGA webcam. It’s frankly not any good, so I don’t see it as a reason to recommend the later model. 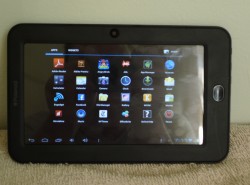 This tablet ships with the same broad set of apps as on previous Polaroid tablets, so you should be good to go with just about anything you want to do, right out of the box. It doesn’t have an app store, but there is a link to make it easy to install the Amazon Appstore. I did so, and after I logged into my account I installed the Kindle app. It works.

I also installed Angry Birds Space, and performance and load time was good. The tablet was reasonably responsive (no lag) and didn’t misinterpret any of my presses.  Youtube worked without a hitch, and other owners have reported that Adobe Flash installed just fine.

But not all apps worked. For example, Netflix installed but I couldn’t log in to my account.  I suspect that is because of the added security this app requires. 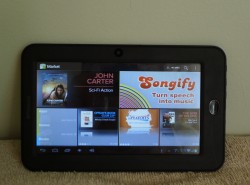 As good as the Amazon Appstore sometimes is, I have come to rely on some apps that Google won’t release elsewhere like Google Reader, Gmail, and so on. So I did what I always do with a new tablet, . I pulled up my usual instructions for an easy Android Market install and gave it a go.

The process went without a hitch nor even a hiccup. I have Android Market installed, and I got the paid copy of Aldiko as well as the Google apps I need. All the apps installed just fine.

You can find the instructions here.

I didn’t get a chance to test this app on a trip, which is my preferred method to stress the battery life. But I did note that battery life on standby was measured in several days, which is fairly good for a budget Android tablet. I would estimate the battery life to last around 5 hours with Wifi on and steady use.

Opinion (One Week In)

I’m going to have to agree with the early adopters who have already posted in the comments. This tablet isfunctions well for its price and has decent build quality. This is a very nice device and I feel it’s an excellent value for the price. So long as you don’t expect more than a basic tablet, this one should do you well.