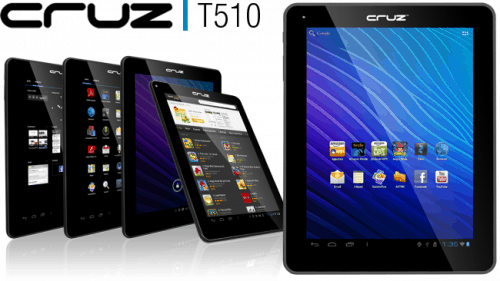 Velocity Micro is a company that, whenever ever they’ve crossed my desk, was usually selling the most expensive item in a price range. With today’s news we’re looking at a 10″ budget tablet that, while priced rather high, is likely going to sell for a lot less.

The T510 is running the latest version of Android on a 1.2GHz CPU with a 400MHz graphics chip. Along with the 9.7″ capacitive touchscreen, this tablet has a pair of cameras, Wifi, 8GB Flash storage, a microSD card slot, HDMI out, and a g-sensor. This tablet ships with Flash pre-installed as well as the Kindle app, Zinio, and Amazon Appstore.

I’m still waiting for word on the camera specs, but at this point I’m not expecting to be wowed. This is a budget tablet, so I would expect them to at best be marginally adequate at taking pictures but not any where near the quality of a camera on a premium tablet.

This is a decent enough looking tablet, but today I’d much rather focus on the price. This isn’t going to be a rant about how this tablet is overpriced; so are its competition. Given that few of the other tablets ever sold for the listed retail, I’m not sure it has any real meaning.

Retail for the T510 is $250, making this tablet appear to cost about $60 to $90 more than its competition. And it doesn’t have the specs to justify the difference – not based on what VM has released, anyway.

Last weekend I rounded up a list of 8 budget 10″ Android tablets from 6 manufacturers. All of them are selling for less than $200 each, and they all have specs similar to the T510. Take the  eGlide XL Pro II from Ematic, for example. It looks to be using the same CPU as the T510, and about the only ways it comes up short is that it lacks the second camera and it has less Flash storage.

But the eGlide XL Pro II also has a microphone and guess what? The original retail for that tablet was $220, even though it’s now selling for $160.

I was planning to complain about the T510 costing too much, but that’s not the story here.  I think it’s more interesting to note that the retail price often bears little resemblance to the price that the tablet eventually sells for. And this is a trend that’s been going on for some time now. For example, I criticized the Nextbook Next7s for hitting the market with a retail of $130. This was uncalled for given that I bought it a few weeks later for $90.

In the future I plan to ignore the listed retail price; clearly it’s a work of fiction.