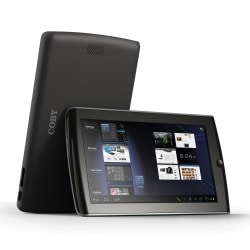 Coby is a name we all recognize, and it’s one that’s been on tablets and electronics accessories for quite a few years now.Earlier this year Coby released a trio of 7″ Android tablets, all of which ran Android 4.0. I bought the cheapest model at Walmart for $90.

The MID7033 is a decent enough tablet with a 7″ resistive touchscreen. Like much of its competition, it’s running Android 4.0 on a 1GHz CPU. It has 4GB Flash storage, a microSD card slot, Wifi, speaker/mike, and a g-sensor.

This is the most basic model from Coby, and there’s a few compromises to get the price down. It doesn’t have the camera found on Coby’s next model up and on some of the competition, which is no big loss – most were crap anyway. But this tablet also lacks the capacitive touchscreen found on nearly all new 7″ Android tablets. 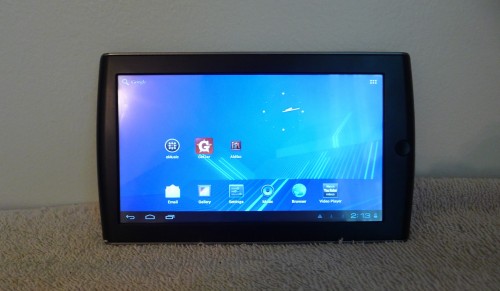 Between the app store issues, resistive touchscreen, and strong competition in this price range, I’m not sure I’d recommend this tablet to anyone. There are no major issues with it, but the same can be said for a lot of its competition. It’s not the worst tablet I’ve seen, but it’s still somewhere down on the bottom rungs. 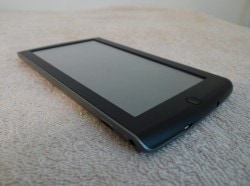 With the exception of the touchscreen, the general build quality is good. It has a sleek appearance with a black front and a gray backside. The speaker is on the back and all the ports and slots on one end of the tablet. The power and volume buttons are on the upper edge, microSD card slot and headphone jack on the lower edge. The USB port and power are on the right edge, with the Back button to the right of the screen.

This tablet ships with the basics, including the stock browser, email client, file manager, calendar, and media players, but it doesn’t have much more than that. It’s missing Facebook, Twitter and other apps that usually clutter up Android tablets, and instead of a Youtube app this tablet ships with a link to the mobile Youtube website. It works.

I actually like the fact that this tablet doesn’t have the same clutter as other tablets, but not everyone agrees. 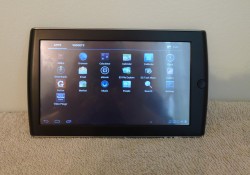 The MID7033 also ships with Aldiko (yay) but it doesn’t have a decent app store. Instead it ships with Getjar. Fifteen thousand apps just doesn’t cut it.

Update: I’ve identified the problem with the Amazon Appstore; I had too many Android devices registered to my account.

Naturally I want it, and since I already have instructions on how to install it I gave it a shot. Unfortunately I encountered a problem. I couldn’t get the app to work after I installed it. If you ask me, that’s a good reason to get another tablet.

I couldn’t do my usual stress test on the battery, but I have been using this tablet around the house. I haven’t had any issues with the battery draining while the tablet is asleep, and I’ve found that this tablet usually lasts 3 to 4 days in light usage.

If I had to estimate it, I’d bet that the battery should last a day of moderate to heavy usage, or around 5 hours use. That’s well within the expected range for a sub-$100 tablet.

What Else is In the Box

This tablet isn’t much different from others in its price range, but I did want to highlight one small difference. While most budget Android tablets have a basic USB cable in the box (and on rare occasions a headphone jack), this Coby tablet also comes with a USB converter.You can use it to plugin USB drives and (probably) keyboards and other accessories.

That’s a nice little bonus which is worth a couple bucks. Or it would be, if not for the fact that this tablet doesn’t come configured to accept input from the external KB. The file manager on the device is also unable to see the thumb drive when it’s plugged in.

I’ve checked on an Android forum and they’re simply supposed to work.

After a couple days use I can tell you that this tablet is going to have some issues with the touchscreen. Right now it requires a firm press before it responds to input. that’s going to make typing more than a little irritating.

But after a week of use I think I’ve gotten used to the touchscreen. Yes, it is a little more touchy than some, but it’s perfectly adequate. I do miss the multi-touch gestures that you can do with a capacitive touchscreen, though. I now instinctively use pinch-zoom, and naturally that doesn’t work.

A Brief Review of the Coby Kyros MID 7033