A  few weeks ago I set myself the goal of reviewing the larger budget Android tablets. I’ve spent a lot of time with 7″ models, but  I’d never really looked at the 9″ and 10″ Android tablets.  I’ve since learned that I have no interest in the larger tablets, but I can see the value. 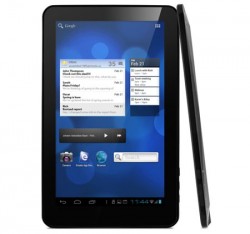 The eGlide XL Pro II is the first 10″ tablet I’ve reviewed, and I got it because Ematic was kind enough to send me one. But that doesn’t affect my opinion; this tablet is a decent value.

And in any case the unit I reviewed wasn’t the one they sent; I got impatient and ordered one from Walmart, where it’s selling for $160. It’s really not a bad tablet for that price.

BTW, Laptop Magazine beat me to this review. I think they were a little harsh. They kept comparing this tablet to the various premium tablets and faulting it when it fell short. They clearly expected too much from a budget tablet.

Just to be clear, my standards for judging this tablet  were drawn from my experiences with recently launched 7″ budget Android tablets.  My expectation of the performance generally staid the same; all I did was scale the size up to 10″.

I was generally satisfied by this tablet. Both the performance and build quality were right about what I expected for a budget tablet considering the price I paid and when I got it. 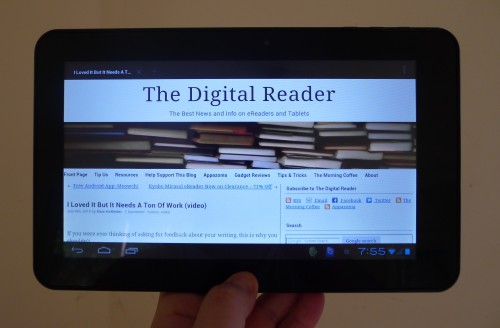 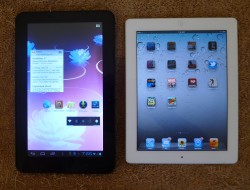 The eGlide XL Pro II is like many of the newer budget tablets on the market in July 2012; it’s running the latest version of Android (4.0) on a single core 1GHz CPU with a 400MHz Mali graphics chip. It has a 10″ screen with a decent resolution (1024×600). I’ll admit that the screen is lower res than on a premium tablet, but not by all that much.

Considering its status as a budget tablet, this device has a fairly decent set of specs. It ships with 4GB Flash storage, a microSD card slot, VGA webcam, speaker/mike, Wifi, HDMI out, and a USB Host port. The speaker is on the back, and it’s rather quiet. The microphone is on the right edge  (next to all the ports and slots), and the webcam is above the screen on one of the long sides.  It has exactly 3 buttons (power and volume), and all are on the upper edge. They’re rather awkwardly placed, but that’s not all that important.

The front and back are both shiny, and they tend to pick up a lot of fingerprints (eh, so do most tablets). The tablet is a tad on the thick side, but it’s not any heavier than other 10″ tablets I’ve used. The thickness actually makes it easier to hold, IMO.

I’ve found touchscreens to be a hit or miss proposition on budget tablets, so this is usually something I check rather carefully. This is one of the better touchscreens (among budget tablets). It’s not as good as on a premium, but I found it quite responsive and accurate.

I usually use Angry Birds to test the touchscreen and general performance, and it was decent.

It might surprise you, but this is one place where this tablet falls down.  It’s kinda laggy.

This tablet has the same CPU as most current 7″ budget tablets, so you’d think the browsing experience would be similar. Nope. I’ve noticed that I tend to browse faster on the larger screen, and I keep getting slapped in the face by the hardware limitations.

That should probably have been expected, and it’s not fair to criticize the tablet too much, but this detail is worth noting.

I had the bad luck to lose internet connection at home, so I spent the first part of this week camped out at the library. That gave me a chance to do a stress test on the battery. I don’t always offer an estimate on the length of battery life because I’ve found that the stress test is a more accurate way to judge the battery life.

Assuming you leave it charging over night, this tablet should last a full day of moderate to heavy use. That’s not bad; it is in fact on par with most 7″ budget Android tablets.

Laptop Magazine can confirm my estimation; they found that this tablet lasted 5 hours and 23 minutes while browsing the web. Considering the price, that’s not bad.

It worked okay with the 480p test video included on the tablet as well as the couple files I grabbed off of my laptop. Youtube ran fine, and I didn’t see any dropped frames, artifacts, or the audio getting out of sync. The sound was rather quiet, though, and the audio quality did reflect the fact this is a cheap tablet.

I don’t mean to under report this category, but it’s largely becoming a checklist item, not one that needs to be covered in depth. Most all budget tablets do a decent job of playing video now so there’s not much to say anymore. 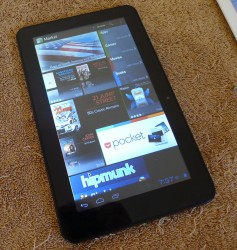 The  eGlide XL Pro II ships with Kobo as well as all the basic apps you’ll need to use the tablet: file manager, email client, browser, media players. it also ships with a number of games, none of which I liked, but they should be good for a few minutes distraction.

It doesn’t ship with Android Market; instead this tablet uses Ematics’ own app store. It was missing a few titles, but the selection was not bad (for an off-brand app store). It would not be a terrible thing if you were suck with only this app store. But I want more.

I was able to install a hacked Android Market using my usual instructions. It worked. I’ve downloaded my usual Google apps as well as Aldiko. All installed fine.

This tablet ships with an extra feature that set it apart. It doesn’t interest me, but it is worth a mention.

In the box you’ll find a pair of red-blue 3d glasses. I don’t have the ability (nor the interest) to test them, so I cannot say if they work. I’d make an effort to test the glasses if they used a more modern tech, but since I don’t like 3d in general I’m just going to leave the glasses in the box.

What’s Not in The Box

The tablet is missing a couple cables, and without them it doesn’t quite have the abilities listed on the box. It’s missing an HDMI cable as well as a USB converter (needed for USB Host). This means that this tablet cannot actually out put video to your TV, nor does it have a USB host mode. Neither missing cable is a serious issue, but I did feel the need to warn you.

I’ve found at least a couple bugs in how this tablet handles text, but they’re more amusing than serious defects.

The spellcheck looks to be missing a dictionary; it tells me that every word I type is wrong, including obvious ones like the ones in this sentence. For the most part I don’t need spellcheck, so it’s merely funny and not annoying. But it is a bug.

This tablet ships with voice recognition, and you are supposed to be able to recite emails, tweets, and other text so the tablet can convert your words to text. Except it didn’t work for me. It was in fact wrong 80% of the time, sometimes hilariously so.

This is not a tablet that will let you do two things at once, but that’s what I expected going in. But it does offer a few advantages over the 7″ tablets. For example, the larger screen size is better for watching video, IMO, and if you’re into digital comics it will also show you more of a page.