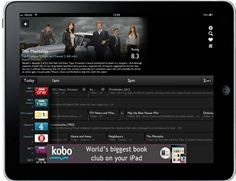 Kobo’s marketing agency in the UK put out a press release yesterday, and I feel it really isn’t getting the attention it deserves. While it did get written up in The Bookseller, I think that post did little more than cover the facts, and it missed a couple important ones.

The tl;dr version of the press release is that Yodelmobile is going to run a new ad campaign for Kobo (with the goal of driving more customers to the Kobo ebookstore). As you browse the web (and use ad-supported free mobile apps), you’ll see ads served up by Yodelmobile which will be designed to get you to go back to Kobo.

The image at right is one example (sorry it’s not bigger).

Yodelmobile has been Kobo’s partner in the UK since Kobo signed WHSmith, and they’ve been managing Kobo’s ad campaigns. This detail is neither here nor there (all companies have marketing consultants), but it does set a background to yesterday’s press release. It is also no surprise that companies run ad campaigns, but how Yodelmobile is running this campaign deserves some attention.

I did see this story yesterday on the The Bookseller but I decided to pass. I read the title of the post on The Bookseller and then went looking for the press release. Once I figured out it was an ad campaign I decided to pass on the story; it frankly wasn’t that interesting. But then Jane Litte over at Dear Author noticed a detail I missed, namely:

The integrated tracking also gives full visibility on app usage – such as whether users are heavy readers, medium or light and when they have purchased a book – and Yodelmobile is able to change messaging to target readers with specific promotions or genres.

Yodelmobile isn’t just going to serve up ads based on your browsing behavior; they will also have full access to everything you do inside a Kobo app. And they plan to use that information to follow you around the web, pitching ads.

TBH, I’m more amazed that they admitted to this than I am shocked by the stalking. We’ve known for the longest time that this kind of thing is possible. Your apps are watching you, and that includes reading apps.

Still, this is an excellent argument in favor of using a third party app, isn’t it? I wonder how Aldiko or Moon+ handles this.

Aldiko’s privacy policy seems to suggest that they are far less likely to stalk readers, and I’m not sure they’d have enough information to pull it off. I don’t think the Aldiko app has enough permissions to get all the data they’d need.

In any case, let this stand as a warning; you’re being watched.