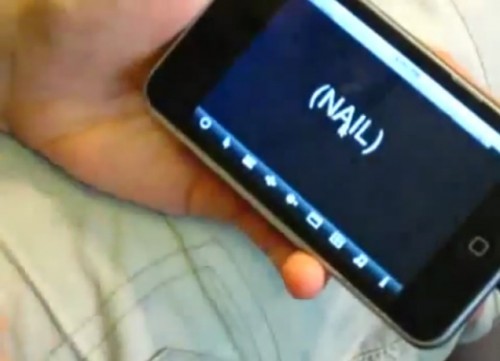 A rumor broke earlier today that B&N’s next Nook tablet would have a revolutionary new screen tech, and I think we might be looking at it.

Last fall a research team at Carnegie Mellon University what could be the next step in touchscreen technology. They called it Tapsense, and once it sinks in you’re going to wonder why no one thought of it a long time ago.

Tapsense takes an ordinary touchscreen and adds a microphone. I know that doesn’t sound like much, but the researchers have found a way to use the mike to identify what part of the finger (as well as other objects) is touching the screen. For example, the demo video below shows that they can tell when you’re using a fingernail, the tip of your finger, or the knuckle.

I’m sure you’re used to using multi-touch gestures on a touchscreen and I’m sure you know of apps that behave differently based on where you swipe the screen. Aldiko, for example, will adjust the screen brightness when you swipe along the left edge of the screen.

Think for a moment about the complex gestures you could use if your device were able to identify which part of the finger you were using. At the very least, you could have definitions pop up at a knuckle press, highlights at a nail press, and bring up a menu when you tap with a fingertip. Here are some other ideas:

While typing on a virtual keyboard, for instance, users might capitalize letters simply by tapping with a fingernail instead of a finger tip, or might switch to numerals by using the pad of a finger, rather toggling to a different set of keys.

Another possible use would be a painting app that uses a variety of tapping modes and finger motions to control a pallet of colors, or switch between drawing and erasing without having to press buttons.

And those are some of the simpler options. Combine to of the different taps and you could come up with some truly complex gestures.

So where does B&n come in? Well, I’m not sure anyone has used this technology yet, and that would mean that it fits into the rumor as the revolutionary screen tech. What’s more, B&N has developers who are smart enough to come up with a clever way to use it. I’m looking forward to seeing if they do.