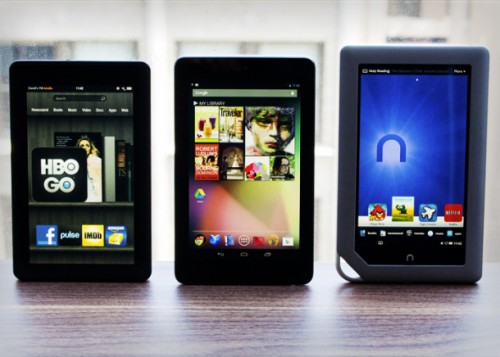 David Carnoy of Cnet has a source who is claiming that Barnes & Noble’s new Nook Tablet, which is expected to ship this fall, is going to have a revolutionary new screen.

Now we’re getting word from a credible source that Barnes & Noble, a 7-inch pioneer with its Nook Color and Nook Tablet, is set to bring out out a new 7-inch model that features “revolutionary screen technology.”

The source, who’s proven reliable in the past, wouldn’t elaborate on the specifics of that technology but said that it was developed in-house by Barnes & Noble (with the help of “another company”) and had not been seen in another product before.

There are a number of possibilities for the new screen tech, but I’m not sure that any of them stand the chance of hitting the market this fall.

Pixel Qi, for example, has a new high resolution screen which matches the screen resolution of the new iPad, but given that it’s not even in production yet I don’t expect to see it this fall. Qualcomm could be putting forward a screen based on screen tech developed by the recently acquired Pixtronix, but I don’t have any info on that. There’s also a chance they might show off a Mirasol screen, but due to delays in building the factory I don’t expect that either.

If I had to guess, my bet for the most likely candidate would be Liquavista. Unfortunately they’re not supposed to hit mass production until next year.

In case it’s not clear, I’m stumped about the revolutionary new screen tech. While I can think of a few more examples, none of the truly revolutionary stuff is ready to go on a device.

At this point I’m wondering if the revolutionary aspect of the screen won’t be quite as revolutionary as CNet’s source claims. I’m betting that it will be more evolutionary than revolutionary. B&’s last new device was the Nook Glow, and its front light, as nice as it was, was only an improvement on existing implementations.

Then again, the Nook Tablet has a screen that, while not strictly revolutionary, is still better than the screen on other 7″ tablets – including ones that supposedly use the same AFFS+ screen tech. The Kindle Fire, for example, uses the same screen tech but has a worse quality screen.

There is always a chance that B&N managed to pull off another jump in screen quality.