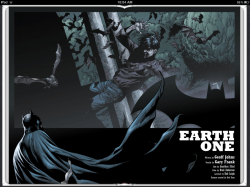 Earlier this week DC Comics released their first graphic novel in iBooks. The book in question was Batman: Earth One,  and once I learned that it was available in 3 major ebookstores I got to wondering how it compared from one platform to the next.

All 3 platforms have their own format for ebooks like graphic novels, and I’ve never really looked at how they might take the same content and display it differently. So last night I plunked down $39 for 3 copies of the one ebook.

Sidenote: I was also going to get a different graphic novel from the Kobo store and see how well it worked, but my Kobo iPad app cannot seem to find the ebook in my account.

I’ve only played with them for about an hour or so, but I can already see that one of the platforms is the one I want to use over the others. I think the Nook Color does graphic novels better than either iBooks on the iPad 2 or the Kindle Fire.

Let me explain why. 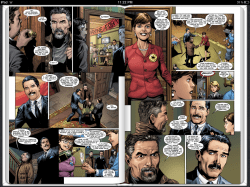 Given the large screen on the iPad you’d think that iBooks would have a natural advantage, wouldn’t you? Unfortunately that turned out not to be the case. iBooks does some questionable things with graphic novels, and I don’t like them. It introduces details that the content creator didn’t create (like the faux crease in the page) which are supposed to make the ebook look more like paper book. 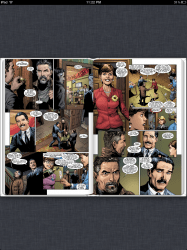 While I am opposed in principle, my main objection is that it looks like crap. Click on the screen shot at right to see what I mean.

The screenshot was taken in portrait mode, so you would expect that iBooks would display a single page. Nope, it shows the same 2 page view that you’d see in landscape mode. As you can see, this results in tiny text and a lot of wasted screen real estate.

But that’s not the only reason I went with the Nook platform for digital comics. I also like the fact that Nook platform (and Kindle, too) has a directed viewing mode. iBooks doesn’t appear to have it, and at some point I think that could be useful.

BTW, now that the Nook and Kindle Android apps both support graphic novels, whatever size advantage that the iPad had is gone. I have Android tablets that size, and there’s no reason why I shouldn’t use them instead.

And as for the Kindle platform, I picked Nook because the Nook Color would let me zoom in on a page and because it also offered a 2 page view in landscape. It was useless in this case but I do like having the option.

The Nook platform also has a better menu layout than on the Kindle Fire. If you want to jump around inside a graphic novel you’ll see thumbnails of each page and that should help you find the point you’re looking for.

P.S. Before you rush out and buy ebooks, please note that I left a couple alternatives out of the review.  I neglected to cover the digital comics apps from comiXology and others, and I also didn’t mention PDF apps like GoodReads. This was intentional; I just wanted to see how the 3 major ebookstores handled this particular ebook.