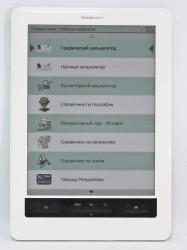 The Jetbook Color, Ectaco’s 9.7″ color E-ink ereader, will never be my favorite device. The screen is disappointingly gray, the JBC is expensive, and it is both slower and less capable than the similarly priced iPad. But today I was reminded in particular why i don’t like this ereader: Ectaco shipped it with a far from complete firmware.

Actually, that’s not so bad; the real issue is the update process. I know it’s common now for everyone to ship an incomplete device with the goal of pushing out a firmware update, but Ectaco takes the cake.

Ectaco doesn’t send out little updates that replace a file here and there; no, the updates come out as a single BIN file that contains all the apps running on the Jetbook Color.

Apparently Ectaco’s development process doesn’t allow for partial updates, so instead they have to send out a complete set of files each time they offer an update. And since I don’t have the fastest internet connection at home, it can take me an hour or more to download.

Now I remember why I left the JBC in the closet for the past several months rather than write about the changes; it’s not worth the aggravation. It’s almost like I’m being punished for being an early adopter. Not only do I get stuck with a marginally functional device; I also have to waste my time doing the job of Ectaco’s techs each time I install the update.

And to add insult to injury, Ectaco has been rolling out monthly updates ever since the JBC launched. Not all were the size of the current update, but I recall that at least one other early update was over a GB in size.

If anything, I suppose I’ve been spoiled by Android tablets and the iPad. With the former, I never expected to get an update so I am grateful for whatever I can get. And with the latter, Apple has always made sure to send out a polished device and keep updates to a minimum.

Then again, I don’t see why i shouldn’t be bothered by an incomplete device; it’s not like I’m buying it on the installment plan, or even paying for optional upgrades. I’m paying for a finished product, and I really would expect it to be finished before it comes out of the factory.