It’s been quite some time since I last saw an Android tablet with an integrated digital ink pen, so today’s news is a treat.

Casio has just announced a new line of tablets which they plan to sell in Japan this fall. The Paper Writer line is based on a 10″ Android tablet running Android 4.0 on a 1.5GHz TI OMAPS CPU. They have 1GB RAM, 16GB Flash storage, Bluetooth/Wifi, GPS, HDMI out, a pair of 5MP cameras, g-sensor, light sensor, and more (the spec sheet isn’t clear). Two of the models will also ship with an LTE data connection as well as Wifi (n).

These tablets caught my eye because they’re shown with a digitizer pen of some kind. You are supposed to be able to use it on a pad of paper and have the tablet capture what you’re writing. Unfortunately, it looks like Casio is selling the pen separately, and that makes the tablet not nearly as interesting. 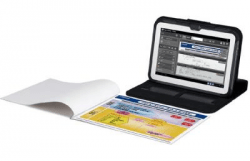 In fact, I’m not sure exactly how the pen integrates with the tablet. The press release doesn’t clearly mention how you’d capture the pen strokes. All I can find are references to using the camera to take photos of pages of notes which will then be converted to text by the tablet. I think you’d position your notepad like Casio shows in the product shot and let the tablet do it’s work.

That’s not nearly as much fun as the last pen/tablet hybrid I used. The Nextbook Next5 was a 7″ Android tablet that E-Fun released last year. It  used a sonic system to track an included pen as you wrote on the included piece of paper.

It was very well designed, but that device never went anywhere. There really wasn’t a clearly defined benefit to using the system, and that made the higher cost difficult to justify. It was also limited to only recording what you wrote on the piece of paper immediately next to the tablet, and I didn’t always find it convenient to waste so much space just to write on a small notepad.

But the Casio tablets are another matter. I’m looking forward to seeing the reviews.