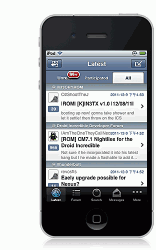 It may have taken a few more years than some would have liked but MobileRead is now available via Tapatalk.

For those who don’t know, Tapatalk is an immensely popular app which lets users login and participate in their favorite forums. It”s been around since at least 2009, so you could think of it as a precursor to the many blogs and news sites who have launched their own apps over the past several years.

You can use the Tapatalk app to read and respond to comments, upload content, and generally do everything you’d expect to do via a web browser.

This app has pretty much grown to be the de facto method for forums to add mobile support, so much so that I can’t recall forums ever going through the same explosion in apps that blogs have in the past few years. It did take MR a while to join the party, and Alex, the owner of MobileRead, had considered adding support for Tapatalk a couple times but held off for one reason or another. This would have required installing a plugin, and as I understand it the plugin raised security and technical problems that Alex wanted to see addressed before he installed the plugin.

Given that MR also had a mobile site at mobileread.mobi, we thought there was no need to rush the issue.

I’m told the app works well, though I have not tried it myself. The app costs 3 bucks, and I don’t feel it’s worth it. I don’t tend to browse MR while mobile and I don’t see that changing any time soon. I’m also balking at the thought that I would have to buy an app for iOS as well as Android (I do have an iPad); as a matter of principle I object to having to buy content 2 and 3 times.

You can find the Tapatalk apps in iTunes, Google Play, SlideMe, and for the BlackBerry.