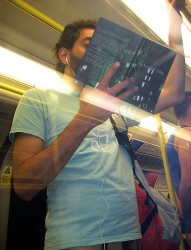 August is usually a quite month for book news due to all the publishing folks on vacation, but not for Amazon. The retail giant has just announced that they’ve set a new record for ebook sales in the UK.

Amazon said that two years after introducing the Kindle, customers are now buying more ebooks than all hardcovers and paperbacks combined. According to unaudited figures released by the company on Monday, since the start of 2012, for every 100 hardback and paperback book sold on its site, customers downloaded 114 ebooks. Amazon said the figures included sales of printed books which did not have Kindle editions, but excluded free ebooks.

Amazon hasn’t actually released any information yet but apparently The Guardian got a sneak peak (it’s Monday already in the UK).

Eh. I was amazed when Amazon reported the same news last year for the general Kindle Store; now that was a surprise. Today’s news is simply a repetition. What I’m more interested in learning is how many of those ebook sales were cannibalized from print sales.

I have a working theory that publishers could see a net positive gain in sales if they make ebooks easier to buy. I like to buy complete backlists for an author all at once (price permitting), and I doubt I’m the only one. That’s something I never did with print; instead I spent hours in used bookstores browsing before buying a variety of titles from a bunch of different authors and publishers.

I’d also like to know which prices saw the most sales. Of curse Amazon won’t tell us that kind of detail, but I suspect Amazon’s figures will look something like the ones released by Smashwords back in April. Their figures showed a $3 sweet spot for ebook prices, and I’d love to know where the sweet spot is for the UK ebook market. So would a lot of authors, I think.

All Amazon has said was that Brits who owned a Kindle were buying 4 times as many books as before they bought the Kindle. While that’s great news for Amazon, it doesn’t actually tell us much about the readers’ overall buying pattern. We’re missing an important detail, and that is the number of books that Kindle owners used to buy elsewhere back before they had a Kindle.