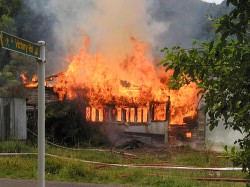 The hot story in digital publishing this week was the Lendink Witch Hunt.

A little over a week ago a bunch of authors noticed that a site by the name of lendink was showing covers of their ebooks. Without confirming what was going or or what the site was doing, these authors flew into a rage and started issuing a shitstorm of demands that their ebooks be removed from the site and that Lendink stop pirating their ebooks.

I covered this story myself on Monday. I didn’t really know what was going on, so I reached out to a bunch of the authors who had issued the demands. I’ve just heard back from one of the authors.

I’m going to assume that everyone knows about Lendink by now and that you know the site wasn’t committing piracy. But if you’re finding this for the first time, you can read my post from Monday, Lendink’s response, or you can read this.

The author in question is O. G. Tomes (here’s her blog). I found her via Lendink’s Facebook page. That’s where Tomes had posted 2 bogus DMCA takedown notices in which she says that Lendink was hosting a copy of her ebook. You can find a copy of the notices here (search for the name “Tomes”).

Not only is she not contrite, she still doesn’t understand what Lendink did nor the terms of her contract with Amazon. Her ignorance is so mind-boggling broad that it will stand as a milestone for future generations of authors.

Here is Tomes’ explanation for her part in the lynch mob:

This situation is a sad one and warrants an explanation for all the parties involved. If at any time I had received a reply from Lendink or Amazon had taken a clearer stance maybe I could have avoided being compelled to demand removal of my works; ie their links and covers. I was never contacted by anyone requesting permission to display my works for sale or lend by Lendink. I did not authorize them to pursue their activity of listing any of my books. The site openly admitted to losing their affiliation with Amazon yet continued to work toward that moment when they could once again get paid for their referrals. My attempts to contact Lendink to answer my requests for information on their procedures were ignored. Attempts to join the site to find out the information were blocked. I followed “Lendink’s” directives for filing notices directly from their site. I have attached a copy to this email.

I think the matter warrants discussing but in a rational manner.

At this time, I must state that I do not grant permission for this conversation or any information contained or attached herein to be used in any public forum.

First, let me say that I don’t need her permission (snicker) to post a copy of her email; I’m posting it for its news & commentary value so I have a clear fair use justification.

I’m at a loss to figure out where she is the most wrong. Is it the fact she admits she didn’t confirm exactly what lendink was doing before sending the fraudulent takedown notices? Or is it the way she blames Amazon and Lendink for her own ignorance of the contracts she signed?

Folks, I don’t even have to look at her contracts with Amazon to know that she agreed to everything and anything that lendink was actually doing. And from what I can tell, all Lendink did was show her covers; the site didn’t have a copy of her ebooks (that’s what she claimed in the takedown notice).  Everything Lendink did was allowed by Amazon’s contracts with their suppliers. These clauses are in the contracts so Amazon’s affiliates can do their marketing thing and boost Amazon’s sales.

And you can ignore everything she writes about Lendink losing their relationship to Amazon; the site might not have been able to earn a commission as an affiliate but it still had permission from Amazon to post the images. Trust me, that’s an unrelated technical matter having to do with how sites (such as the blog you’re reading right now) can pull info from Amazon (only with Amazon’s permission, basically).

Now, you might be thinking that Lendink should have limited the offered titles to only ones which were lendable. So far as I know that is not information which can be accessed from outside Amazon. All lendink could do was offer ebooks which its members had listed on the site.

Perhaps you think that Lendink should have only shown the titles listed by members? Maybe,  but listing titles which weren’t lendable is at worst annoying, not piracy. What’s more, titles shown to potential readers will sometimes result in a sale. Is that really such a bad thing?

I know that I have at least a few authors who follow this blog so I’d like to make a suggestion.

Folks, don’t be this person. Don’t join a lynch mob, but more importantly please for the love of Phil make sure you know what the hell is going on before you make an idiot of yourself.

If you don’t know what’s going on, ask someone.

One of the more infuriating parts of this lynch mob story is that there are a dozen or more places where the authors could have asked questions before joining the lynch mob. There’s Goodreads, Wattpad, Amazon’s own forums, MobileRead, Twitter, and those are just the ones I can think of off the top of my head.

Heck, if you don’t understand a situation you could always ask me. I might not answer your email, but I would love to find and crush a real pirate site.  What’s more, I just love finding information. And at the very least I can point you in the right direction.

And if you don’t have a network of people you can ask for advice, what the hell are you waiting for? Go start building one.