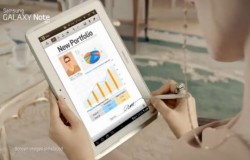 Samsung is officially releasing their new 10″ Android tablet tomorrow, so today they let all the early reviewers post the reviews. It’s a mixed bag, with just about all the majors blogs as well as a couple sources which I didn’t expect like the WSJ, Time, and TabTimes.

I’m still reading the reviews myself, and here are the ones I’ve found so far.

The Samsung Galaxy Note 10.1 has reached the states with a collection of features and applicability for it’s built-in S-Pen that the smaller Galaxy Note will be proud of. For those of you working with the Samsung Galaxy S III, this device continues the next-level connections the manufacturer has set up with AllShare. For those of you looking to upgrade from the original Galaxy Tab 10.1 with more power and better entertainment abilities, your prayers have been answered.

The Samsung Galaxy Note 10.1 comes with 16GB of storage for $500 or 32GB for $550, and thanks to its fast performance, sensible design, and a bucketload of features, it’s the best Samsung tablet yet.

However, as Jessica Dolcourt implied in her review of the Galaxy Note phone, the S Pen’s potential far outreaches its implementation and that price, no doubt driven by the inclusion of the stylus and its supporting technologies, should be about $50 lower. Especially given the limited usefulness of the S Pen for most people, the lack of the Jelly Bean OS at launch, and a lower-res screen than tablets are capable of.

If you’re looking for a full-size tablet, the Asus Transformer Infinity is still the Android tablet to get thanks to its fast performance, useful features, and beautiful, high-res screen; however, artists looking to take their portfolios on the go or those willing to put in the time to learn a new type of interface, will want to give the Note 10.1 serious consideration.

Until the Android tablet-app situation brightens considerably, I can’t give an unqualified thumbs-up to any large-screen Android tablet. (The paucity of tablet-specific software isn’t as dire an issue with Google’s own Nexus 7, since phone apps work decently on its smaller 7? display.) But the S Pen isn’t a gimmick or an anachronism; if you’re smitten with it, and can live with Android’s limitations, you should be tickled with the Galaxy Note 10.1.

The Samsung Galaxy Note 10.1 can actually make your life easier. If you spend a lot of time in meetings, you think in images, or you want to use your tablet as a home remote control, the Galaxy Note 10.1 has features that are perfect for you.

But the iPad’s primary pressure-sensitive stylus accessory, the Adonit Jot Touch (which we’ll review in the future) costs extra and doesn’t offer the sensitivity and palm rejection of the S Pen, and the iPad can’t do the Galaxy Tab’s marvelous split-screen trick. For offering compelling features found nowhere else, we’ll let the Samsung Galaxy Note 10.1 share the Editors’ Choice award for large tablets with the Apple iPad.

It’s pretty clear that people want their tablets to support pen input — the huge market of iPad styluses is proof positive of that. Samsung’s S Pen system is way ahead of the curve in that regard: it’s responsive, it’s precise, and it works well enough, most of the time.

But a pretty good pen system built on top of a disappointing Android tablet still makes for a disappointing Android tablet. There’s just no reason to suffer through it: the Nexus 7 costs less than half as much as the Note and is without question the best Android tablet available. The iPad costs the same $499 and offers an unrivaled selection of apps, an industry-leading display, and so many stylus accessories and note-taking tools that you won’t even remember that the S Pen makes them all look a bit primitive. And a regular notebook and pen do not make blooping sounds at the slightest provocation.

And now we come to the most important question of all: is it worth buying one of these things? I’d wager very few people would consider buying a niche device like the Galaxy Note 10.1 solely because its got a nifty processor, or because it’s slim and light. In the end, the deciding factor is going to be the S-Pen. If you’re a fan of the gimmick (or just a general Android fan), then the Galaxy Note 10.1 is definitely worth your consideration.

That said, devices like this don’t exist in a vacuum. Its $499 base price tag puts it right alongside the new 16GB iPad, which is sure to be a contender for any potential tablet customer. Considering the iPad’s strong developer support and truly excellent display, it still seems like the more worthwhile purchase right now. I wish that weren’t the case (I’m head-over-heels when it comes to this S-Pen business) but it’s a sad truth — since Samsung is trying something different with the Note 10.1, there just aren’t many apps that really take full advantage of the S-Pen yet.

I’ve been testing the Galaxy Note 10.1 for the past four days and, in general, I like it. It works smoothly and quickly, and the stylus and split-screen features perform as promised. However, I found its battery life to be much lower than the iPad’s, and some of Samsung’s software to be overly complicated. Plus, even Samsung concedes that the key differentiator, the pen, isn’t likely to be used by most people most of the time.

Still, I can recommend the Galaxy Note 10.1 as a better choice than the iPad for people who value the stylus or split-screen capability, or for those who prefer Android.

It’s been a long time — six months, to be exact — since Samsung first gave birth to the Galaxy Note 10.1. Our initial reaction was one of intrigue; a risky bet we were eager to see play out in final form, especially given stiff competition from various quad-core competitors. So, does the Note 10.1 manage to overcome its well-matched rivals and carve out its own spot in the crowded tablet space? Ultimately, no matter how deftly executed and streamlined the S-Pen experience may be, this tab still feels like a niche device, especially since the suite of compatible applications is still pretty small. This is the sort of purchase early adopters and creative professionals are likely to make based on their familiarity with Android and the additional flexibility afforded by that stylus.

The S Note app could have set this tablet apart, but it’s a failure. On the handwriting-to-text feature, only really large letters come out clearly, so you get three or four words per line. It can’t always ignore your palm resting on it while you write. You accidentally close out of the app, move the cursor unintentionally, or just stop writing. In landscape mode, there are gigantic spaces on both sides.

I walked away from an preview briefing I had related to the Galaxy Note 10.1 impressed with Samsung’s focus on productivity, work-related use cases, and business professionals at large. The Note 10.1 has been very well thought out and built specifically to enhance tablet productivity.

To do this I think more innovation around the keyboard and pen accessories for tablets will be key. Apple is the clear leader in tablets today with a majority share of the market among both consumers and business.

But by focusing specifically on business needs, I believe Samsung has a chance to make some serious inroads on the iPad. Better still, the competition is sure to push both companies to continue innovating.