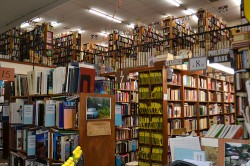 As a member of the Illiterati, I must say that I’m dismayed by this next bit of news.

You can forget the stereotype of the IMing, Facebook, callow youth of today with a short attention span. A recent market survey report shows that millennials (Americans born between 1979 and 1989) are buying far more books than you might expect.

The report itself is $800, so I have not seen it. But I’m told that it shows that millennials are buying about 30% of the books in the US market. That number doesn’t mean much until you factor in the fact that this age group accounts for about 43-ish million individuals out of a US population of 311 million and an adult population of 245-ish million.

So a group that is about a sixth of the US adult population is buying nearly twice their share in books and ebooks. That’s impressive, and it gets even more so when you factor in that the survey also showed that baby boomers, who have more disposable income than most millennials, only accounted for 24% of the books purchased last year. Assuming the data is correct, the younger generation is actually more into books than their parents. Ponder that.

The report also spelled doom for brick-and-mortar bookstores. The data showed that millennials buy 43% of their books online, and that they’re leading the way in adopting ebooks and other digital content. Absent a sudden surge of nostalgia, this doesn’t bode well for regular bookstores.

This could indeed be the future of bookstores: