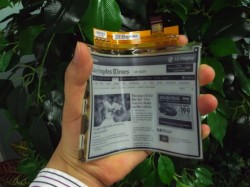 A company not named Apple is holding a press event next week, and some interesting rumors have started to circulate. While all I know at the moment is that a couple Kindle bloggers have been invited, Geekwire has been told that Amazon is working on a device with a screen resolution of 1024×768.

If true then that is a rather curious number. It’s a completely different screen geometry from that of the Kindle Fire, and by the standards of some screen fetishists it would now qualify as low resolution on a 7″ screen. Since Amazon isn’t likely to set themselves up for ridicule, it seems likely that this screen is attached to a smaller device.

Assuming the rumor is real, of course.

But what is the device, I wonder?

There’s a chance that this might be the HD E-ink screen which LG unveiled earlier this year. That screen is both higher in resolution as well as not available outside of Russia (Wexler) or China (Onyx). If the next Kindle used it Amazon could instantly set the new Kindle apart from the Nook Touch and Kobo Touch. The new device could also be pitched as being more durable than any existing ereader thanks to the flexible screen (video).

But it would also set the new Kindle apart from all the existing Kindles. Unless Amazon plans to replace them all (and we know only one possible Amazon device has cleared the FCC), the new Kindle would be the odd duck in the lineup. It would cost more and it might even tempt people to do stupid things with one of the other models because they got confused as to which was which.

That’s why I’m going to go out on a limb and say that we could be looking at a Kindle smartphone. I know that I’ve heckled this rumor several times, but there’s always been the chance that I was wrong. The rumor has been going around for a few months now, and while there’s no evidence to support the idea it’s not entirely impossible.

Smartphones with a screen resolution of 1024×768 have been released at one point or another, so clearly that screen geometry is a possibility. And it’s also possible that the Kindle smartphone cleared the FCC without anyone noticing; I wasn’t watching and those who were might not have known about the smartphone rumor.

I’ve jokingly called Amazon’s smartphone the Amazon Blaze, but that was mainly because I was paying homage to a 1 April joke  from 2011. I don’t know for sure that it exists, muh less whether it has a 4″, 5″ or whatever sized screen.

Still, it’s not the craziest thing I’ve heard. That would be the rumor of multiple Kindle Fires in the works for this fall. Given that only one is know to have cleared the FCC, that seems unlikely. And so does that rumor about the Kindle Fire getting free 3G (that doesn’t even pass the snicker test).