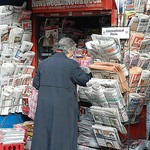 Should newspapers raise their prices? I’ve been doubtful in the past. There’s no monopoly on facts, after all. If the New York Times wants to hide its content behind a paywall, you can just read the news from some other paper online instead. Sites like Google News exist to make that sort of thing possible.

But now, in The Guardian, Frédéric Filloux argues that the best way for newspapers to make a lot more of the revenue they desperately need right now is by raising their prices. He points to examples from a study of a number of newspapers that have had price hikes in the last few years, and experienced overall revenue increases because of it. While some of these examples aren’t terribly convincing (The New York Times raised its newsstand price by 33% from $1.50 to $2 in 2009 and increased its revenue by a whopping 2%), they do tend to suggest that newspaper demand may not be as elastic as I had thought.

Why is this the case? Apparently just about anyone who’s still loyally reading a newspaper by now will find it in himself to shell out a little extra to keep reading that paper if that’s what it takes. Newspapers are losing a lot more readers from the switch to digital than from the price increases, the study’s authors say, and prices haven’t yet reached the point where loyal readers will be inclined to go away. So newspapers still have room to crank up their prices and add some additional subscription revenue.

One thing the study doesn’t look at is the effect that these increases are having on advertising revenue. Is the additional subscription money offsetting any losses from concerned advertisers pulling out? Are there any concerned advertisers pulling out? It would be interesting to know, given that advertising will probably continue to have much more effect on papers than the offset from this subscription revenue.

And I also wonder just how long this “bank” of paper readers will stay around, given that many of them have to be members of the older generation already. As they die out, will younger readers replace them? Will there reach a point where raising prices is no longer cost-effective?

It should be interesting to find out.