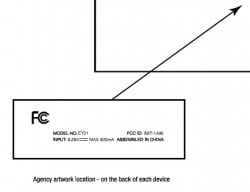 Amazon’s media event is just over 24  hours away.  While we still don’t know for sure what Amazon plans to unveil, I’m betting that it’s going to be a new Kindle and a new Kindle Fire.

I’ve just found the FCC paperwork for another nondescript device. Like the last 2 sets of filings I posted (here, here), this one has all the interesting detail concealed. And like the others it leads back to CSC, a company that I believe was hired to front for Amazon.

Today’s device is described as an “electronic display device”, and like the other possible ereader this device has the model number EY21. All I know is that it has Wifi (b/g/n) and was tested with a headphone jack.

This means that we now have what could be a 3g equipped Kindle and a Wifi equipped Kindle. That sounds awfully similar to the current set up for the Kindle Touch and K3. Both of those Kindles come in 2 flavors, with the 3g option adding to the price. I’d say that Amazon plans to continue offering 2 similar devices at different price points.

If I’m right then this would tend to disprove the Cnet rumor from last Friday. Their sources reported that we would see 2 Kindles tomorrow, with one being a new device and the other being a revamped update of the original Kindle Fire. Like I said last week, the FCC paperwork didn’t support that rumor.

But what does this device look like? I don’t know, but I’m hoping that the leaked images for the Kindle Paperwhite turn out to be real. That would be a fun device to have, especially if it has an HD screen.

On a related note, I’m still expecting to see the dock for the Kindle Fire tomorrow as well. But in any case I will be on hand in Santa Monica to see what we shall see.