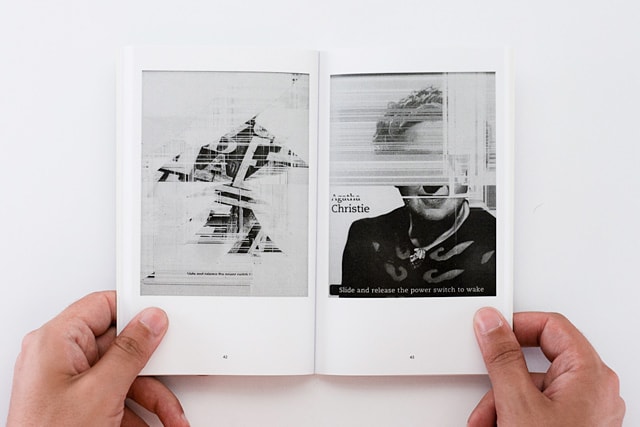 At one point or another we’ve all seen a broken ereader screen but the following video showing the graphic aftereffects of the death of so many ereaders will likely be unsettling to some. Viewer discretion is advised.

A pair of artists, Sebastian Schmieg and Silvio Lorusso, have just published a new book which takes a look at damaged ereader screens. They’ve found and assembled a collection of 56 E-ink screens broken due to impact and torsion damage, and then released the set as a POD book (Lulu).

It’s a startling set of images, including several that, as a result of the damage, become a collage of what was on the screen before and after the damage. Some of the damaged screens apparently broke the data connection to a segment of the screen, thus preserving some part of the last useful info displayed. That is an effect I had not seen before.

You can watch the following video to see what the broken screens would look like on a Kindle Touch, but if you want to see what the book looks like I would check out one of the artists’ websites (here).

The effect is quite different between this video and the book. The images are positioned so that the screenshot are positioned on each page so they look like they’re on a device, not pictures in an art book. That’s a clever touch.

I don’t know about you, but I’d never considered the broken screens as art before. Whenever I had been shown a broken screen on a device I had always noted the technical details of when and how it was broken. But it was just another dead device, not a piece of art. The fact that it was on a gadget kept me from valuing the image as art, which is itself a lesson in how the medium sometimes is as important as the message.

You can find images like the ones in this book on Flickr and other photo sharing sites. Or at least you can find photos of the broken devices. I’m sure you may have seen them from time to time, but if it never occurred to you to observe them as art and not failed engineering then the medium overwhelemd the message.