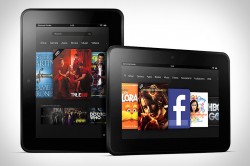 My face was red on Thursday because i disbelieved the 4G rumor and the multiple Kindle fire rumor, but in my defense I didn’t have any evidence to support the rumors. The thing is, 2 of those new Kindle Fire tablets had not yet cleared the FCC.

The paperwork only showed up Thursday afternoon, which means the story going around about the 4G model not having FCC approval is clearly not true.

Like the last several Amazon devices (here, here, here), these 2 filings only probably belong to Amazon. The paperwork has all the interesting details concealed (internal and external photos) and leads back to the same front company (CSC) as before (but 2 new addresses), so I’m guessing that they belong to Amazon.

At this point the FCC paperwork is really not much more than a footnote, but I’m making the note so I remember to go back and look at the guts once the concealed docs are released. Of course, that won’t happen until March and by then someone will have bought and stripped the tablets for all to see.

One of the filings is for a tablet with Wifi and Blueooth, while the other appears to belong to the 4g LTE model (it has a whole mess of frequencies it was tested for, including LTE) and that model also has an IC ID, meaning it has been passed by the Canadian version of the FCC. Hopefully that means we’ll see this device go north sometime soon.

And in other news, the new Kindle Fire tablets are once again eschewing Google.  They’re set up to use Bing as the default search engine, not Google Search, and that suggests an ongoing power struggle between Amazon and Google.