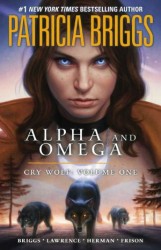 It looks like Penguin has decided to get into the risque this past week. They have just announced their Berkley/NAL division will be launching a new imprint which will producing graphic novels from existing Penguin titles as well as creating new and original titles.

InkLit will launch on 2 October with the release of Patricia Briggs’s Alpha and Omega: Volume 1. This book was originally published in 2008 as a prose novel called Cry Wolf and had also been released by Dynamite Books as an 8 issue series of comic books. InkLit will be combining multiple issues into two  volumes and republishing them as a hardback. There are no plans yet for a digital comics release, but the first volume is up for pre-order.

Next year InkLit is going to publish two graphic novels from Charlaine Harris, author of the Sookie Stackhouse series. The first will be an adaptation of Grave Sight, the first book in the Harper Connelly Mystery Series, and it will debut in January.This book was originally published in 2005 and is the first of 4 in that series. Harris will also pen an original title for InkLit. Cemetery Girl will mark both Harris’s and InkLit’s first original graphic novel publication when it is released later in the year.  It is the start of a planned trilogy co-authored with award-winning writer Christopher Golden and illustrated by Don Kramer.

The other infamous author to be published by InkLit will be Laurell K. Hamilton, author of the Anita Blake, Vampire Humper series. She has committed to adapting one of the existing titles from the Anita Blake series. The Lunatic Café is the 4th book in the series and it will be joined by a not-yet-titled original graphic novel featuring Edward, a bounty hunter character from the world of Anita Blake.

Other Inklit titles include an adaptation of Martin Misunderstood by  Karin Slaughter and an original graphic novel from The Atlantic’s editor and cartoonist Sage Stossel.

While I would not normally cover the launch of a new imprint, a friend  forwarded the press release to  with a snicker (we have a similar sense of humor). You see, at least 2 of the authors who will be published via InkLlit already write novels with rather graphic sex scenes, though it’s not clear yet exactly how graphic these new graphic novels will be.

P.S. While I don’t mean to belittle the books, authors, or those who read them, the juxtaposition of the word graphic in describing both the content and publication format was amusing and noteworthy.