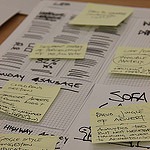 Here’s an interesting piece on paidContent talking about the possibility of embedding electronics in genuine paper in order to add the ability to play audio, send Facebook likes, and otherwise link up a genuine ordinary paper to the Internet. The net-enabled paper would apparently use electrically conductive ink that would react when touched, like the capacitive screens of modern tablet, but not much is really known about the new technology yet.

The tech seems to be strictly one-way—there’s no mention of any sort of e-ink style responsive display in the article (though the project’s homepage does suggest some hybrid interactive display formats). The videos with it tend to talk about things like making it economically possible to provoke sounds out of various paper things like posters or facial tissue boxes. When used in newspapers, it could do things like collect click counts and provide analytical engagement data for publishers and marketers. The paidContent piece doesn’t touch on privacy concerns at all, which is a bit odd when you have quotes like:

Dundee University product design researcher Jon Rogers says: “For pretty much the first time, in a scaleable and manufacturable way, we’re going to connect the internet to paper. When you start to connect that to news, we’re in a goldmine zone.”

If you’re the sort of person who runs your finger along the text as you read, do you really want someone following along with you out on the Internet?

Still, I think it might be interesting if they could build the technology into print books, not just newspapers. Might be able to bring in a few gimmicks more commonly associated with e-books, like Facebook-sharing the part you’re reading, or perhaps running your finger down a bit of text to “highlight” it on your computer.

This technology might have some life for things like posters and restaurant menus. But as far as newspapers and magazines are concerned, I suspect it may be one of those things that looks neat on paper (if you’ll pardon the pun) but fails to catch on in the real world due to price and lack of demand. Newspapers and magazines are moving more toward going all the way to electronic, to shake off the expense of printing costs and move toward the way more and more people are reading now. Are they going to want to add integrated electronics to the old-style media format to make things even more costly?