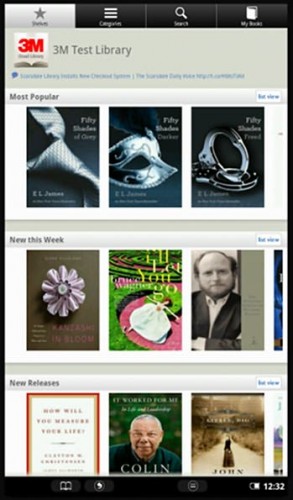 It may have taken B&N a long time to wake up to the fact that readers want easy access to library, but now it seems B&N has it heart.

Last week Barnes & Noble made the new 3M Cloud Library app available in the Nook App Store. This happened right around the same B&N was adding the OverDrive app, but I only noticed today because of the press release.

3M launched the 3M Cloud Library earlier this year. They now have around 70 partner libraries and offer those libraries 200 thousand titles from 300 publishers, including Penguin.

Okay, not very many people are going to use this app, but the fact it is available at all is a major step forward for B&N.

I have been wanting to see library ebook apps in the Nook App Store ever since I returned my Nook Tablet last fall. This was, in fact, one of my major gripes. At the time B&N didn’t exactly seem happy about allowing any competing reading apps, no matter where the content were coming from. Heck, B&N didn’t let Readability into the Nook App Store until June, and I have been told that the OverDrive app had been stuck in the approval process since February of this year.

On the other hand B&N did allow the Pulse news aggregator app into the Nook App Store in early 2011, so perhaps B&N just has a long and contemplative approval process. In any case, the reading options on the Nook Tablet and Nook HD continue to expand.

You can also find this app via Google Play.