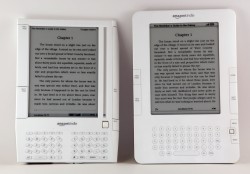 I got the following question late last week, and after rolling it around in my head without getting a definitive answer I decided to throw it open to the #eprdctn crowd on Twitter (as well as anyone else who makes ebooks) and see what the general consensus was.

One of my readers who is also digital publisher is thinking about making Kindle ebooks in the new KF8 format. We’ve been able to do that for some months now, so this isn’t new. But the reader wants to know if it is safe to make ebooks without worrying about how they look on older devices.

Hi there, do you know of any stats/data that indicate how many K3 and older devices are still in use? Or, how many owners have upgraded and no longer use the older ones? I’m trying to figure out how much I need to support mobi7 lack of features vs KF8.

I’m assuming that most every Kindle ebook you make will have an Epub version.  The nice part about making a Kindle ebook in KF8 is that you can effectively make it look almost identical to the better quality Epub ebooks, rather than  creating 2 different quality ebooks from scratch or limiting the the Epub version to features supported by the older Kindle format.

The downside of making ebooks in KF8 is that when Amazon automatically converts them to the older Kindle ebook format, the ebooks could end up looking bad. For example, KF8 supports much prettier formatting options as well as embedded fonts. If you make a Kindle ebook which uses those better features and then try to view it on an older Kindle like the K2, the result will look like a poorly converted ebook. It might even result in a confusing or unreadable ebook.

Question: Are there still enough older Kindles in use to justify formatting the Kindle ebook for them?

Against: All of Amazon’s current Kindles and Kindle apps now support KF8, and they are the majority of Kindles in use. The last Kindle which doesn’t support KF8 was the K2, which came out in 2009, and the Kindle DX, which has been discontinued.

For: Supporting the older Kindles usually won’t cause a problem. Yes, it limits you from using some of the features which can make your ebook look prettier, but do you really need to use those features? Aside from a couple experimental projects I have only formatted novels, myself, so the simpler formatting found in the older Kindle format was more than enough.