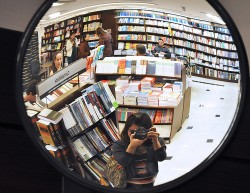 The retail giant’s interest in Brazil seems to be heating up as next month’s rumored launch of the Brazilian Kindle Store approaches. They’ve just signed a new deal with digital content distributor Xeriph and are once again rumored to be trying to buy Saraiva, a bookseller and publishing house.

Bloomberg is reporting this morning that Amazon is sniffing around Saraiva SA Livreiros Editores. This bookseller publishes and sells ebooks in their chain of stores as well as online. It’s expected that Amazon would use the deal to broaden their base in Latin America’s largest economy.

This rumor has been denied all around, both by Amazon and Saraiva What’s more. informed sources indicate that Saraiva is most definitely not interested in being bought by Amazon. I’ve also been told that this is an old rumor which had already circulated the Brazilian press.

In other news, Amazon has signed a deal with Xeriph. This is one of Brazil’s leading ebook distributors and it represents over 200 publishers. Around 20 of those publishers have declined the contract and plan to negotiate independently with Amazon. The exact terms of the contract have not been disclosed but Amazon reportedly is paying 50% of list price, which is the same deal that Xeriph signed with Amazon’s local competition.

New rumors suggest that Apple and the 2 dwarfs (Google, Kobo) are going to launch ebookstores in Brazil next month. That is new to me, but it is certainly possible.