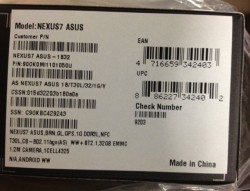 Google is going to be holding a press event 9 days from now and it looks like we might have some hint as to the news.

First, the long rumored and accidentally confirmed Nexus 7 Android tablet with 32GB storage has been confirmed for the US market. One Staples employee is reporting over on the Android Central forums that his store now has the new Nexus 7 in stock. It’s reportedly going to go on the shelf on 29 October, the same day as Google’s even in NYC. Retail will be $249, just like I expected, and that suggests that the 8GB model will be retired and the 16GB model will be sold for $199 – same price point as the Kindle Fire HD.

But that’s not Google’s only tablet news. There is now confirmation from a couple different directions that Google has a Nexus 10 Android tablet in the works.

An Italian gadget blog has turned up a 5MP image on Picasa which, according to the metadata, was taken by the Nexus 10 in South Korea. The photo is 5 days old, suggesting that someone at Google posted it to draw the attention of gadget blogs.  The location data also lends credence to the rumor that the Nexus 10 was developed by Samsung, not Asus.

And there is also apparently another image, taken with a different Nexus 10 in another Google office. Note that this is a trick they used back in June, before the nexus 7 was announced, and it certainly got my attention at the time. And it certainly worked now.

And a couple Android blogs are reporting that the Nexus 10 is showing up in their server logs. According to Android Police, the Nexus 10 is running Android 4.2. They’ve seen a couple different build numbers for the OS, suggesting that it is still under development.

It’s my guess that Google plans to unveil both the new Nexus 7 as well as the Nexus 10 in NYC a week from Monday. I think the 2 photos would have only been posted right before the launch date; they’re being used to build anticipation, so unless Google plans to release an even juicier detail at a later date the Nexus 10 will be revealed in 9 days.