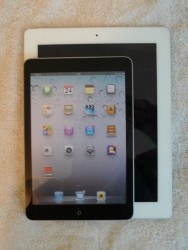 Much to no one’s surprise, Apple has announced the iPad Mini with a 7″ screen as well as a new 9.7″ iPad. It’s not clear yet whether this is a completely new iPad or if Apple merely gave it the new lightning dock connector, but it reportedly has an A6X CPU.

And yes, the iPad has the crappy 1024×768 resolution 7.9″ screen which many of us assumed/feared it would have as well as the odd bezels that showed up on the dummy units.

And that goes double considering that this tablet doesn’t have the A5X chip but instead has the older chip found in the iPad 2. It has 2 cameras, including a 5MP rear facing camera, 10 hours of battery life, and reportedly Wifi which is twice as fast as the norm.

The Wifi model goes up for pre-order on Friday, with the LTE model coming later this year.