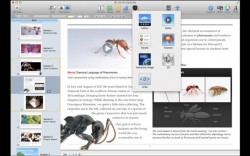 The string of unsurprising news announcements continued today with mentions of iBooks and iBooks Author.

Apple’s ebook app is going to be updated later today, just like rumors predicted. iBooks is going to get support for 1990’s web browser (like continuous scrolling) as well as support for Japanese and Chinese text – 2 languages which the app already supported in iBooks v2.2 (I checked).

iBooks is also getting support for iCloud, Apple’s cloud storage service, as well as better support for the same basic limited sharing abilities found in a lot of iOS apps (Facebook, Twitter, email, that’s it)

The new version of iBooks Author is going to get a bunch of new features which should make it easier to make digital textbooks – assuming you one, own a Mac, two, want to only make Apple’s proprietary format, and three, only sell the textbook in the iBookstore. The new version of the app new templates, including portrait templates, and ability to embed your own fonts. It is also reportedly easier to insert mathematical expressions into the text, though it’s not clear yet whether iBooks will gain any better ability to display the expressions.

Today, 200 million devices run iOS 6, including the over 100 million iPads. Apple also reported today that there are 1.5 million titles in the iBookstore and over 400 million downloads have been recorded since it launched 2 and a half years ago.