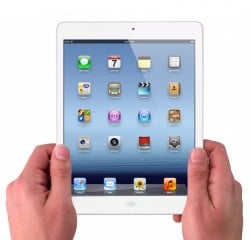 About 8 hours ago Apple unveiled the iPad Mini. This $330 tablet can be summed up as the worst of all possible compromises (as seen by a blogger). It has Apple’s premium price for a tablet that has basically the same abilities as the iPad 2, only in a device which is about 2/3rds the size and a little thinner.

Don’t get me wrong, I think Apple is going to sell a lot of them. The iPad Mini is going to shore up Apple’s sagging iPad sales. They only sold 16 million or so iPads this past quarter, which was below the 17 and a half which analysts predicted.

And yes, I’d call that sagging sales. Apple had a $400 iPad 2 which was poised to draw sales away from similarly priced Android tablets. But even with the iPad 2 sales still didn’t hit expectations, and I think that is because the cheaper iPad 2 also sucked sales away from its more expensive sibling.

I’m pretty sure the iPad Mini will continue the trend.

The problem as I see it with the $330 iPad Mini is that it will appeal to people who will buy it for reasons of false economy. These were people who were going to get an iPad anyway and they’ll get the Mini because not it is good but because it is $170 cheaper than the iPad.

And for that same reason you likely won’t see these iPad Mini buyers picking a Mini over a $200 Android tablet. Offer those same buyers a $200 Kindle Fire HD or a $330 iPad Mini and I think they’ll choose the KFHD.

Honest to goodness, I think the fact that the iPad Mini price starts with a 3 and not a 2 is going to have a not insignificant affect on whether people buy it. On some subconscious level it looks like the iPad Mini costs a hundred bucks more, not $30, and that will cause some to balk.

I do so wish Apple had priced it at $250. I know this is my fault for hyping myself up, but I was all set to buy one for that price. It would have made a very nice companion to the full sized iPad 2 sitting beside me as well as a better alternative to any of the slightly cheaper Android tablets. And at that lower price point the iPad Mini would also have appealed to the truly budget minded.

Oh well. Apple usually has an iPad event in the Spring. That’s probably when they will announce a price cut on the iPad Mini.