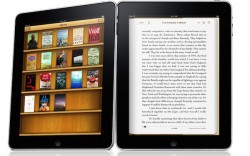 If you’ve been reading about Apple or their gadgets for any length of time then you’ve probably heard the term reality distortion field.

This term was coined 30 years ago to describe the effect Steve Jobs had on the people around him. It has since grown to be used as an explanation for why some bloggers accept Apple as the most original, most innovative, most perfect company which can do no wrong. It’s also part of the reason why some bloggers describe a feature which Apple has copied as being the most perfect thing ever.

Today I have an example of the RDF. The thoroughness of its effect will blow your mind.

I was over on Mashable a few minutes ago, reading a review of iBooks 3.0. According to this reviewer, it is the most wonderful thing ever. When Apple invented the continuous scroll they revolutionized ebook reading:

Apple has changed that with iBooks 3, which it announced at the iPad Mini launch Tuesday and dropped into the App Store early Wednesday morning. I’ve been reading with it for a couple of hours, and am falling head over heels for the continuous scrolling feature. It changes the game for book-reading, completely.

It’s so good, in fact — so natural and smooth — that if Amazon doesn’t introduce a similar scrolling feature for its Kindle apps and readers, I fear the company may have lost a battle in the ereader wars.

Folks, the continuous scrolling feature has been around for decades. You even have an app which can do it.

Don’t get me wrong, I have no problem reading long content in a web browser, including novels.

I also know that the continuous scroll of content in the web browser was one of the spurs which lead to the idea of page-sized bits of content in ebooks. People wanted to get away from it – not embrace it.

The perceived dislike for scrolling was also the inspiration for the various content apps to have page turns, and it also lead to Onswipe and Mobstac, 2 startups which are working to remove scrolling from webpages by offering readers an app-like experience.

And yet that Mashable blogger was blown away by an idea which Apple and pretty much everyone ran away from years ago. That blogger is so thrilled by something Apple has done that he completely forgets that the idea is old and established and that it’s so widely used that his readers will be using a continuously scrolling web browser to read his post.

This, folks, is the visible effect of the reality distortion field at work.