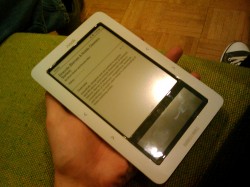 Back in May I reported about a lawsuit brought by the National Federation for the Blind. They were suing over some recently purchased Nook eReaders. The devices were bought with a federal grant, and as I have mentioned before the Nook is completely inaccessible to a visually impaired user.

While normally this would be an interesting story for me to cover, the settlement closely parallels the one which the Sacramento Public Library  made with the DOJ and NFB back in August. Both cases involved Nooks and both settlements involved not buying anymore inaccessible ereaders.

And since I covered the Sacramento settlement agreement as well as the surrounding technical issues in more than enough detail I do not see a reason to repeat myself.

But one thing I have learned since I last covered this issue in August was that these lawsuits had cooled the interest of at least a couple libraries. They had been toying with the idea of getting ereaders, but thanks to the lawsuits they planned to wait.

And on a related note, thanks to the changes in the DMCA exceptions announced today, the libraries who have Nooks will be able to legally remove the DRM and move the ebooks to an accessible device. So while they might lose the hardware at least the libraries won’t lose their investment in the content.

via The Digital Shift