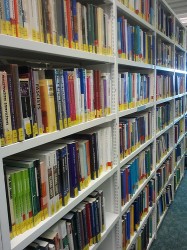 A number of the major publishers dislike library ebooks because they fear that each ebook checked out is a lost sale. While this new survey data suggests there is some substance to that fear, the survey also shows that library patrons who borrow ebooks also buy them.

Back in June and July of this year, OverDrive sponsored a survey which was  conducted by the ALA. Library patrons were polled via the virtual library branch website OD operates on behalf of partner libraries, and asked about their borrowing, buying, and reading habits. A total of 75,385 people responded to the survey and they came from a broad spectrum of education, age, and income.

But in spite of the broad spectrum, the majority of the respondents fell into certain categories. The respondents were overwhelmingly female (78%), earned more more than $50 thousand a year (75%), were in their 40s or older (72%), and were college educated (73%).

This concentration is particularly noteworthy because it is similar to the data presented by Bowker in their annual surveys.  Educated, well-paid women are the dominant book buyer in the US, though not quite to the same degree as shown in this survey.

The survey includes questions on a number of topics, including how, why, and how often patrons use the library, but I am mainly interested in the questions on buying ebooks.

The respondents reported buying an average of 3.2 books a month and reading them on an ereader (83%). The survey data also showed that for most patrons both borrowing and buying of ebooks had increased over the past 6 months (60%, 44%), or at the very least held steady (33%, 44%).

But it’s not all good news. It looks like there is some truth to the belief that library ebooks cut into retail sales. A solid majority of library patrons (64%) said that they had never bought a book after checking it out of the library.

Of course, that number does not mean much until and unless we get data on browsing in bookstores (both offline and online) which could tell us how many samples are read without leading to a sale and how many books are picked up and then returned to the shelf. Then we would have something to compare that 64% to.

The reason I want to compare browsing vs buying behavior is because I want to see how borrowers compare the the book buying population as a whole. Putting the 2 surveys together would tell us whether library patrons buy more or less books than the average consumer.

I suspect library patrons buy more the average consumer, but the survey data I would need to prove it is available in an $800 report from Bowker. Sorry, but that’s just not worth it for me.

P.S. If someone does have those stats handy, please feel free to share in the comments.