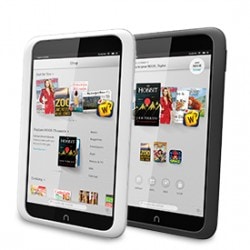 Barnes & Noble has said that they plan to launch the Nook Store in a dozen countries by June 2013 and today I think we learned which country is next on the list after Germany and the UK.

The Russian-language newspaper Izvestia reported last week that Barnes & Noble has filed trademarks in Russia for Nook and Nook Media, the subsidiary which is jointly owned with Microsoft.

I don’t have any information on when the trademarks were filed, but one detail which jumps out at me from the original news story is that B&N is not reported as having set up a local subsidiary. That would suggest that they have found a local partner to sell the Nook for them (unless Izvestia forgot to check for the company paperwork).

We know at this point that B&N has subs in Germany, the Netherlands, and (probably) the UK, with the German sub indicating plans for the German ebook market and the Dutch sub suggesting interest in Europe rather than the low countries as an ebook market (according to Andrew Rhomberg).

And it looks like we might know of one of B&N’s partner’s in Russia. They have signed LitRes as a distributor, a detail which has been confirmed by a LitRes spokesman. This is one of the larger ebookstores and distributors in Russia, and they currently stock 55 thousand titles. It looks like they might already be distributing some of those titles to the Nook Store; I can see 26 thousand Russian language ebooks on the B&N website.

The interest in Russia should come as no surprise. This country has a sizable population, a growing ebook market, a fair number of ereader makers, and most importantly it still has not drawn the attention of Amazon or Apple (according to this chart). Pretty much the only major competition would be Pocketbook. This company is based in the Ukraine, but after having been in the Russia market for many years, it is their home turf.

Bitkom: One in Three Germans Readers Have Read an eBook