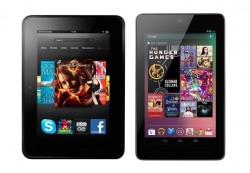 There’s a press release going around tonight from Amazon, and it is basically a concession that they goofed.

In the press release Amazon promises that some time next year they will push out a firmware update for the second-gen Kindle Fire and the 7″ KFHD. The update will include features which will make the tablets more accessible to the visually impaired, including “Voice Guide” and “Explore by Touch”.

I wouldn’t get too excited; you can find these features on Android tablets running the latest version of Android as well as on the Nook HD, HD+, and the Kindle Fire 8.9″.

Update: But those other tablets might not have the same quality of TTS that Amazon plans to add to the Kindle Fire HD. Amazon will be using tech provided by Ivona.

I’m not wrong when I say that they are core parts of Android; they were added in (I think) 4.0 Ice Cream Sandwich. That’s why you can find the features in the larger Kindle Fire HD as well as the new Nook HD.

The question that I would like answered is why the 2 smaller Kindle Fire tablets don’t have these features right now.

Barring some technical explanation for the features not passing QA, it’s my guess that Amazon goofed. They didn’t think the accessibility would be missed on the 7″ Kindle Fires so they didn’t make sure to include them.

Perhaps the protest which the National Federation for the Blind plans to hold in front of Amazon HQ is already having an effect?

Next week, on 12 December, the NFB will hold a protest in Seattle to voice their displeasure about Amazon efforts to introduce more Kindle ereaders into the classroom. These devices aren’t accessible, so naturally the NFB is displeased.

In the absence of any other info, it is my belief that that today’s news is a response to that protest. I’m sure Amazon would love to head the protest off at the pass. I mean, the signs in Braille might not be readable by the journalists covering the event, but they’re still bad press. That is something to avoid if at all possible.

P.S. Yes, I did make blind people jokes. I agree that I am a terrible, horrible, person.