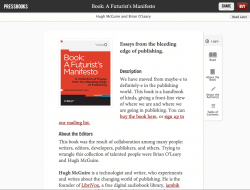 Pretty much all of my creation and communication tools can now be found online, so it should come as little surprise that ebook making tools can be found there as well.

PressBooks, an Epub creation service, has just announced that they are going open source. Sometime next month they plan to release a WordPress plugin which offers much the same ebook making ability as their service.

The skill level required will probably not be all that great, and while using Pressbooks requires learning a few new tricks it doesn’t take that much more ability than what is needed to write a blog post.

This won’t be the first WordPress plugin which lets you make an ebook out of your blog posts. There are at least 2 that I know of, Anthologize and Epub Export. I’ve use the former for about half an hour, and that was more than enough time to know it was crap. It didn’t work well, nor has it been updated in the past year.

I’ve just now heard of Epub Export plugin while gathering details for this post, so I cannot comment on it. But it looks interesting.