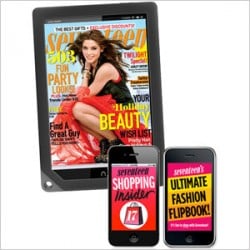 It’s long been obvious that the pipedream of selling content on the iPad was never going to generate as much revenue the early hype suggested, and today there are new signs that selling subscriptions to the digital content might not be as lucrative as some had believed – a detail which the failure of The Daily made quite clear.

David Carey, president of the magazine and media publishing conglomerate Hearst, sent out a “state of the company” email this week. There are a bunch of interesting details in the email (which you can find here) but I just want to cover exactly 2 points:

Print is doing very well, with a number of new titles launching successfully in a bunch of international markets. Digital is not doing quite as well, though Mr. Carey is still pleased with the progress:

In keeping with our UNBOUND positioning, we made impressive gains in digital media. By the end of the year, we counted nearly 800,000 monthly digital subscriptions in the U.S. across iPads, NOOKs, Kindle Fires and Android devices—the highest in the industry. Those subscriptions are now generating profits after 24 months of investment. And how exciting to see how this business is developing organically: More than 80 percent of our digital subscribers are new to our files, and their engagement levels meet or exceed the high levels we see from our print products.

While 800 thousand subscriptions sounds like a lot, it really isn’t. According to their website, Hearst publishes 20 titles in the US, so if you divide the total number of subscriptions by the title count you end up with a much less impressive 40 thousand. Considering that any one of those 20 titles has a subscription base in the millions, 40,000 subscriptions isn’t a whole lot.

Between the 2 magazines, Hearst has 5 million print subscribers vs a nominal 80,000 digital subscribers. That’s not much, and that figure comes nearly 3 years into the iPad app era, 3 years from the point where digital magazine content was supposed to have taken off. What’s more, Hearst has actually been into digital magazines since long before the iPad. I can find them listed as a Zinio partner way back in 2006 and 2007.

Just to put this into perspective, Hearts boasts of reaching 87 million Americans each year, making the 800 thousand worth only about 1% of their reach.  They also launched a new title this year, HGTV Magazine, and its print subscriptions hit 750,000 subscribers this year.

I won’t go so far as to say digital magazines are a failed concept, but I do think that we still have not yet seen the ignition point. Sales are growing, but they’re not exploding like ebook sales were after the Kindle Store launched.

If anything, I think publishers are going to have to rethink the magazine paradigm. Existing print titles are tied to the idea that the content comes out in a huge monthly (or weekly) bundle, half of which is adverts. That single monthly bundle is a business decision, not one based on the original non-ad content, and it perhaps should go by the wayside.

Edit: As Jon Jermey pointed out in the comments, a monthly magazine issue is to an article what the CD was to a track. I think it’s time to break up the bundle into smaller pieces of content, and possibly even to selling the individual article. Given the growing recognition of  short works like Kindle Singles, it’s not such a stretch to think that this could be a functional business model.

The digital magazines which I will be watching this year are the several newbies which have only a few stories per issue. The Magazine and Symbolia are offering content in smaller bite sized bundles rather than the single huge monthly bundle. This could be the way forward.