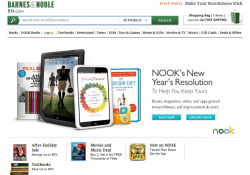 Here’s a heartfelt suggestion for the besieged people at Barnes & Noble, in the spirit of the recommendations that Joanna Cabot and my other friends at TeleRead have offered:

Rid your operation of DRM to the maximum extent your publishers will let you, and if they resist, at least make a case for social DRM, so technical incompatibilities aren’t a factor. By itself, that won’t save your company. But at least I’ll have a reason to buy from you despite prices so often higher than Amazon’s.

I’m plugged into the Amazon ecosystem, as well as a cloud with nonDRMed ePubs for my Android machine. And while I could run your reader on my Nexus 10 or iPad, it ain’t so hot compared, say, to the amazing Moon+ Pro Reader that I use with ePubs, while at times enjoying the Amy voice from Ivona. But suppose I could read B&N books with Moon and not have to worry about losing already-purchased titles. “Lose” is exactly what happened to the some of the few DRMed books I warily bought from Fictionwise, the independent bookstore you’ve shut down. The more familiar readers grow with e-books, the more they’ll hate DRM. It’s a great way to keep losing market share.

Please, B&N. While I can’t recall the last time I bought an e-book from you—thanks to mix of higher prices and DRM—I’d love an excuse to take up the B&N habit. And maybe you’d pick up a second customer as well. My wife owns a Nook HD+, but for now she is using it almost entirely to read OverDrive library books.

I like DRM-free ebooks as much as the next guy but this strikes me as a pipe dream. This isn’t going to happen absent publishers signing on, and I just don’t see that happening. Sure, several independents have gone DRM-free, Wiley has started selling DRM-free ebooks via O’Reilly, and even Macmillan is dabbling in DRM-free ebooks with SF publisher Tor-Forge.

But a large concerted action to get rid of DRM just to save B&N? I don’t see that happening. Sure, they all fear Amazon, but even though it is easy to tell people the sky is falling it’s hard to get them to act before it completely falls.

reposted under a CC license from Library City