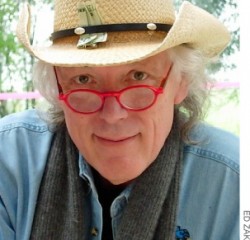 The NY Times is reporting that San Francisco-based designer Michael Cronan has died of colon cancer. He was 61.

When Amazon prepared to introduce its first electronic reader in 2007, it turned to Mr. Cronan, who envisioned imagery reflecting the reading experience as an embryonic but rising technology.

Ms. Hibma said in an interview on Friday that in pondering a brand name, Mr. Cronan “wanted to create something small, humble, with no braggadocio,” while choosing an image that “was about starting something, giving birth to something.” He found the name, she said, by likening use of the new e-reader to “starting a fire.”

According to his website, Michael is only credited with coming up with the name for the Kindle, not the first ugly design nor the jumble of characters used to illustrate the backside. His other achievements include the name and brand image for Kno, a digital textbook distributor.

In the spring of 1997, he was asked to forge a name and an identity for a new device, a digital video recorder developed by a company called Teleworld that offered more sophisticated television recording choices than the videocassette recorder.

Believing that “we were naming the next TV,” Mr. Cronan recalled, “I thought it should be as close as possible to what people would find familiar, so it must contain T and V.”

“I started looking at letter combinations,” he added, “and pretty quickly settled on TiVo.” (The “Vo” portion, he said, had a connection to the Latin and Italian words for vocal sound and voice.) Then came the search for a mascot that Mr. Cronan hoped “would become as recognizable as the mouse ears are to Disney.” He created a TV-shaped smiley character with the name TiVo inscribed on its face, rabbit ears suggesting an early TV set and large, splayed feet. Teleworld changed its name to TiVo Inc.