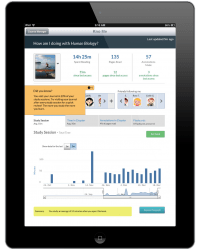 Here’s some news which will sound oddly familiar to those of us with long memories. Kno has just put out a press release announcing the launch of a new analytics dashboard which students can use to track their reading and study habits. It’s called Kno Me, and Kno is hoping that students will be able to use the dashboard to improve their study habits and thus learn more from their classwork.

It’s going to work with all the textbooks sold by Kno and is available on all Kno interactive textbooks for iPad, Windows 8, and web browsers and will soon be available for Android and Windows 7.

Here’s the fun part: While Kno is framing this as a launch of a completely new, they actually announced Kno Me in January 2012. When I spoke to Osman Rashid, the CEO of Kno, today everything he said was strangely familiar, and after a little bit of Googling I discovered I was right. I can’t seem to find any sign that the dashboard was implemented but the press release was archived over on Engadget.

The only really new bit of news today are the sharing options. Kno is now going to enable students to follow other students and see how they study. Students have to opt-in to being followed, and that will give them a measure of privacy that can’t be found in the similar analytics service launched by Coursesmart 2 months back.

I must say that I am really curious about whether this new follow option will really have a positive effect. I don’t know how effective the Kno Me analytics engine is, but one thing I fear is that trying to copy the study habits of a better performing student could result in a cargo cult type of situation. Just because you copy the external behavior doesn’t mean you will also achieve the same effect of the internal actions.

The metaphorical term cargo cult has been used to describe any number of similar behaviors. The mistaken belief that by copying the external details one can achieve an identical effect has cropped up all over the world, including in US and Europe.

And I’m afraid w might be seeing the same thing with Kno Me. What do you think?