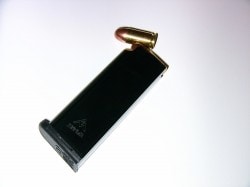 I have Google Search Alerts set to look for articles on keywords likeKindle, ereader, and the like, so I regularly see crime reports where a Kindle or some other ereader is stolen. But this one made me giggle.

The AP is reporting that one delinquent 18-year-old has recently pleaded guilty for Felony Robbery. Apparently the convicted felon Cameron Christian Blake wanted to buy his mother a Kindle Fire, so after stealing $130 from a gas station, he spent $82 on a Kindle Fire and used the rest of the money to buy Marijuana.