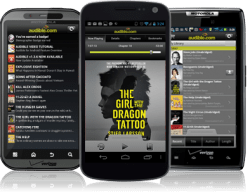 Google may be pushing for Android devices to abandon expandable storage but it looks like not all app developer don’t think it’s a good idea.

Audible has just pushed out a new update for their Android app, and according to the change notes this app now supports storing your downloaded audiobooks on a microSD card or other removable storage in your Android smartphone or tablet.

Edit: A reader has corrected me. This app gained the option of selecting your SD card as the storage location for audiobooks; I’m told that on some (but not all) Android devices the app already downloaded audiobooks to external storage.

I’m still waiting to hear back from Audible on when they expect to add similar support for the iOS app (kidding). Other improvements performance and stability fixes as well as pausing the audio playback when the device pings you with an audio notifications (new tweets, emails, etc).

There is an early report over at MobileRead that the user had to create a folder on the SD card and move his existing content, but that step was likely only required for the many GB of audiobooks that user already had. I’d expect the app to create the requisite folder for you when you change the storage location in the settings menu.